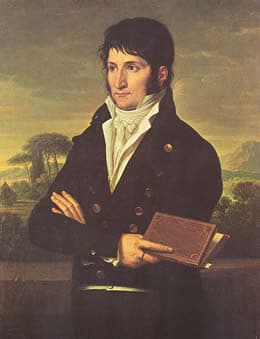 Lucien Bonaparte was born in Corsica, educated on the French mainland, and at age 24 embarked on a career in national politics. As president of the Council of Five Hundred, he would be instrumental in the coup d’etat by which Napoleon assumed power. Later disapproving of Napoleon’s dynastic ambitions, he secretly married against his brother’s wishes and was exiled to Italy. In 1809 he attempted to emigrate to America, but was captured by the British Navy and spent several years in England. In a final gesture of reconciliation, Lucien rallied to Napoleon during the Hundred Days and stood by him until his final abdication.