Never interrupt your enemy when he is making a mistake.
–Napoleon 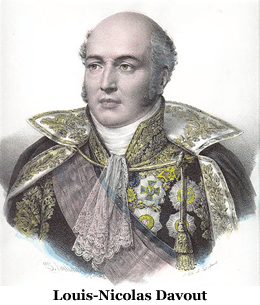 Although the Prussian king, Frederick William III, had required a good deal of provocation to decide upon war, once the decision was made he gave notice of his intentions in no uncertain terms. On 6 September 1806, in defiance of the sovereignty of the newly-formed Confederation of the Rhine, a Prussian army under General Hohenlohe entered Saxony, and three weeks later an ultimatum was sent to Paris demanding the withdrawal of all French forces from Germany. Both actions were clearly intended to redress Prussia’s humiliation in the aftermath of Austerlitz, and Napoleon was surprised by the sudden aggressiveness of the formerly pliant king whom he had strong-armed into a “treaty of friendship” a year earlier. But Frederick William was no Frederick the Great, whose military genius had established Prussia’s great-power status. Instead, he more nearly resembled his father, Frederick II, who had forced the encounter at Valmy only to march away when the enemy refused to surrender the field. Whereas a year earlier Prussia’s participation in the Third Coalition might well have tipped the scales in favor of the Allies, now, despite the promise of Russian support, Prussia would face the French juggernaut alone. To make matters worse, no sooner had offensive operations been set in motion than the Prussian high command fell to squabbling over an appropriate strategy. Many of the aging Prussian generals, reluctant to hazard their reputations, were overly cautious in their approach, while younger voices tended to clamor for a reckless advance, eager for the chance to reassert Prussia’s former glory. In the absence of strong leadership, the combination resulted in a strategic muddle that would prove the worst option of all.

Reinforcing French defenses along the Rhine, the French emperor ordered the Grand Army into action from various bases centered on Munich. Taking personal command on 2 October at Wurzburg, he proceeded northeast with nearly 200,000 men in three columns deployed in a massive battalion square formation, the various corps arrayed in close support of each other and capable of massive concentration wherever the opportunity offered. Crossing a series of forested hills known as the Thuringer Wald, the French left wing under Marshal Lannes encountered the first resistance near Saalfeld, some 70 miles south of Leipzig and well west of Prussia’s natural defensive line along the River Elbe. Here, an initial clash took place between the French vanguard and a combined force of some 9,000 Prussians and Saxons, an encounter that quickly revealed the underlying weakness of Prussia’s preparations. The Saxons, who had been coerced into an alliance only to discover that their own territory would provide the main theater of operations, proved reluctant allies, and despite a clear advantage in numbers, were soon under heavy attack with the unfordable Saale River at their backs. When French cavalry seized the only bridge to safety, the Prussian commander, Prince Louis, led a charge to regain it, only to be cut down in the effort, at which point his entire force fled the field. Outmaneuvered and outfought, the Prussians lost over 2,000 men, the French some 200.

Lannes’ initial victory brought the Prussian command up short, and the next day the outlying Prussian armies were ordered to join the Duke of Brunswick in the vicinity of Weimar, a move that effectively uncovered their most direct route eastward to the Elbe. Exploiting the gap, Napoleon sent two corps (those of Davout and Bernadotte) racing north across their left flank to cut off their likely route of retreat, swinging the rest of his corps westward, where the Prussians were massing between Weimar and the village of Jena. Meanwhile, advancing down the west bank of the Saale, Lannes’ corps arrived in Jena on the evening of 12 October. At this point, had the Prussians been prepared to go on the offensive, they might have turned the tables on the advancing enemy. With an isolated French corps (Lannes’) west of the Saale and one of their own units (Saxe-Weimar) poised to strike the French rear, the opportunity offered to cut the enemy’s supply line through Bamberg and drive the French eastward, away from their base. In addition, another Prussian army under Wurttemberg lay to the north, ready to descend upon the French right. Like the Austrians before them, however, the Prussian commanders insisted on calculating French movements on the basis of their own capabilities and thus were wholly unprepared for the accelerated timetable Napoleon was about to force upon them. Such was their confusion that, in the immediate aftermath of Prince Louis’ defeat, the Prussian command had little idea of the precise whereabouts of the enemy’s main force.

On the 13th Napoleon oversaw the placement of Lannes’ corps from the high ground west of Jena (Landgrafenburg Heights), convinced that the Prussians were planning to withdraw and hoping to catch them on the move. Meanwhile, both Davout and Bernadotte had reached the vicinity of Naumburg, well to the rear of the enemy’s main force. This was contrary to Napoleon’s original orders, which specified that Bernadotte was to halt at Dornburg, approximately half-way between Naumberg and Jena, to cover a potential enemy escape route to the east. Even so, in orders sent to Davout on the 13th Napoleon made allowance for the possibility that both corps might remain together, in which case they were to continue together from Naumberg west to Apolda. These orders ended with the sentence: “The Emperor hopes, however, that [Bernadotte] will be in the position which he has assigned to him at Dornburg.” Under the circumstances, Bernadotte–thought to have been covetous of independent command–opted to obey the emperor’s original intent, marching his troops the ten miles back to Dornburg. The decision would loom large in the coming battle.

Preparations for the battle at Jena continued through the night of the 13th, and early the next morning Lannes advanced with Augereau’s corps in support on his left. Attacking in a dense fog over ground cut by deep ravines, the French descended the Landgrafenberg and pressed Hohenlohe’s army back across a second height known as the Dornburg. At this point, Marshal Ney, pressing forward with only his advance guard, was cut off and threatened with annihilation, whereupon the careful orchestration of the French advance was preempted by an improvised rescue effort by Lannes’ troops. While the isolated unit was recovered, the action resulted in a larger French reversal as the Prussians caught their breath and went on the attack, regaining much lost ground. However, Prince Hohenlohe failed to capitalize on this success and insisted on a delay to await reinforcements, ordering some 20,000 infantrymen to halt in the open, where for two hours they were subjected to French artillery fire. Meanwhile, a precipitous French buildup pushed the Prussians back along the extent of the front, hastening them on their way with repeated charges of French cavalry under the flamboyant Joachim Murat. By 2:30, despite the arrival of the General Ruchel, who made a gallant effort to turn back the French advance, Hohenlohe’s entire force had been broken and was stampeding toward Weimar. Not content with less than the complete destruction or capture of the enemy, the French pursued their beaten foe without let-up.

While the two main armies slugged it out on the Landgrafenberg, some thirteen miles to the north, Marshal Davout had set out from Naumburg for Wiemar with around 26,000 men. His orders were to cut off the Prussian retreat, but neither he nor his commander could have known that the Prussian king and the bulk of his army, over 63,000 men, were even then streaming in his direction. Catching the head of the enemy column off-guard in the vicinity of the village of Hassenhausen, Davout rebuffed the advancing enemy long enough to prepare a defensive line before one Prussian division after another appeared out of the fog seeking to break through to the north. A series of lesser attacks on the French left flank was followed by a concerted Prussian assault upon Hassenhausen, where the French were driven back nearly to the point of collapse before a desperate counter-attack succeeded in recovering the village and flanking the Prussian advance. Much the same movement took place on the opposite side of the line, where a French division enveloped the enemy left, catching the Prussians in a deadly crossfire and forcing them back in confusion upon Auerstadt. Among the Prussian casualties in this phase of the fighting was the Duke of Brunswick, who was shot through both eyes and carried from the field, mortally wounded. Having borne witness to the advent of a new era in the history of warfare at Valmy, Brunswick fell victim to its destructive potential fourteen years later. With his loss, all hope of a Prussian break-out in the direction of Magdeburg faded fast. Their covering force routed at Jena and their main body now driven back at Auerstadt, the entire Prussian army quickly disintegrated, its isolated units fleeing to the northwest in a complete rout.

While Davout (soon to be named Duke of Auerstadt) would be lauded by his commander for his role in the battle, Bernadotte, who, despite his proximity to some of the fiercest fighting of the campaign, had spent the day wandering aimlessly between both battles without contributing to either one. By all accounts, his troops did not fire a shot all day, a failure of command rendered all the more egregious as it seemed to be a case of willful neglect prompted by professional jealousy. Indeed, despite Bernadotte’s active pursuit of the fleeing foe, his performance during the battle nearly earned him a court-martial. Only the fact of his marriage to Napoleon’s sister-in-law, the former Désirée Clary, spared him the full fury of Napoleon’s wrath. Even so, the incident created a personal breach that many would suspect of causing Bernadotte’s betrayal in later years.

Meanwhile, in the weeks that followed the battle very nearly the whole of the Prussian army was captured as the French swept northward in pursuit all the way to the Baltic. By the end of October Napoleon was in Berlin, where he issued a series of decrees instituting the Continental System, a rigorous blockade designed to strangle British trade. If such a blockade were to be effective, however, it would have to include the only major power still opposing the French on the ground. Thus, Napoleon pressed eastward, preparing for a final confrontation with the Russians.