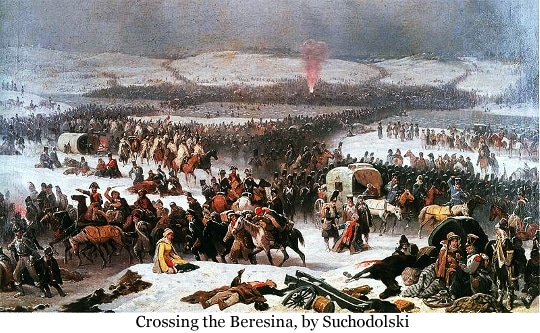 If only he had never mistaken the promptings of his impatience
for the inspiration of genius!
–Philippe-Paul de Segur

“A man has his day in war as in other things,” Napoleon said in 1805. “I myself shall be good for it another six years, after which even I shall have to stop.” In the spring of 1811, as the Emperor sat tending his infant son in the Tuileries, the clock was winding down on his self-prescribed tenure as a soldier. Now forty, he was not the same man he had been at Austerlitz, at which point he had already seen ten years of nearly continuous campaigning. Since then, the strain of his long career and the enormous responsibilities of his burgeoning empire had clearly taken their toll. His physique, which from youth until well into his thirties had remained fit and slender, had grown suddenly corpulent, and his complexion had taken on a pale cast. Whether caused by a glandular condition, or, as some suppose, venereal disease, there was no mistaking the fact that his health had deteriorated. And the effect on his temperament was equally noticeable; whereas in the past he had given due deliberation to the counsel of his marshals and advisors, he now became exceedingly short-tempered, showing little tolerance for any opinions at variance with his own. Even his seemingly boundless capacity for work was beginning to wane.

There had been no diminution of the problems confronting his rule, however. On the Iberian peninsula, a fresh British expedition under Arthur Wellesley had landed in Portugal, driving the French out of the country. Next, the British moved against Madrid, ascending the Tagus River as far as Talavera, where, despite abandonment by their Spanish allies, they scored a tactical victory over King Joseph in July (for which Wellesley would earn the title Viscount Wellington). The next year, 1810, with Masséna in command, the French managed to recoup their losses, reoccupying much of southern Spain and advancing deep within Portuguese territory. Attacking Wellington at Busaco, Masséna eventually forced him to retire within prepared fortifications near Lisbon. Here, however, while the Anglo-Portuguese army remained in relative comfort behind the impregnable Line of Torres Verdes, the French suffered near-starvation in a countryside carefully picked clean by the retreating enemy. After a month of severe shortages, Masséna withdrew, first to Santarem, then, in March 1811, all the way to Salamanca.

By this time Napoleon was faced with an equally serious challenge to his empire on the other side of the continent, where, in December 1810, Tsar Alexander officially reopened Russian ports to English shipping. For Alexander, the move was a matter of political survival. Ever since the Treaty of Tilsit Napoleon’s efforts to enforce the Continental System had threatened to ruin Russia’s merchant class and, with it, the country’s economy. Moreover, the Tsar’s erstwhile friendship with the French emperor had seriously compromised his own standing with the Russian nobility. Nowhere were the implications of that friendship more damaging than in the newly-created Grand Duchy of Warsaw, where the introduction of the Napoleonic Code had led to the freeing of the Polish serfs. While the rest of Europe had been moving away from the antiquated system of feudal servitude for some time, in Russia, serfdom had become thoroughly entrenched and, unlike their counterparts in more enlightened countries, Russia’s serfs–fully nine-tenths of the population–were bound not to the land but to their masters, for whom they represented a major source of personal wealth. Thus, for Russia’s upper classes the Grand Duchy’s new Civil Code was unsettling, to say the least, the presence of such liberal policies on Russia’s very doorstep all but intolerable.

In Alexander’s case, the situation was perilous in the extreme, for as he well knew from the experience of his own father, Paul I, the name of Tsar was not proof against strangulation. Compelled to reinvent himself in order to avoid a similar fate, he responded to Napoleon’s mounting concerns by flatly refusing to reinstate the blockade that had been central to the Franco-Russian alliance. In addition, responding to the threat posed by the Grand Duchy of Warsaw, Alexander contacted Polish leaders with an offer to create a new Kingdom of Poland and initiated plans for an armed Russian advance on Warsaw. The tractable partner that Napoleon had enlisted in a scheme of world domination had clearly turned a corner.

Predictably, the Tsar’s sudden defiance infuriated Napoleon, who responded to reports of Russian military preparations by sending French troops east under Marshal Davout. Even so, Alexander persisted, petitioning the French emperor to cede large portions of the Grand Duchy of Warsaw. For Napoleon such a concession was unthinkable. Having already granted part of the province of Galicia to the Russians for their tepid support in the recent war with Austria, he was now being asked to dismantle the Polish buffer state he had created for the very purpose of protecting Western Europe from the Russian colossus. The request not only violated his sense of honor but also posed a serious threat to his political future. Unless he could bring Russia back into compliance with the terms of Tilsit, the Continental System was doomed, and with it France’s hegemony. Quickly concluding that war with Russian was inevitable, with his usual expedience he determined to wage it sooner rather than later.

Planning for the massive campaign began early in 1811, and in June of the following year, he began assembling an army of over 600,000 men along the Russian frontier, the main body coming into position opposite Kovno. Comprised of Frenchmen, Austrians, Westphalians, Saxons, Poles, Bavarians, Italians, and some dozen other nationalities, the new Grand Army was utterly unprecedented both in size and composition. Attending the troops were several thousand wagons loaded with supplies and as many more for hospital and artillery service; there were thousands of sacks of flour, tons of bricks for building ovens, whole herds of cattle to be driven east along the army’s path, a siege train for reducing Russia’s fortress towns, bridging materials for spanning her many rivers, and over 1,300 heavy guns with which to destroy her armies and fortifications. Whatever blame Napoleon would bear for the strategic wisdom of invading so vast a country as Russia, from a tactical standpoint he could not be charged with underestimating the challenges of the campaign.

And yet, there is reason to believe that his ultimate goal extended beyond even so great an achievement as the conquest of Russia. Throughout his career, he had been fond of comparing his exploits to those of the great conquerors of history: Alexander, Hannibal, Caesar, Charlemagne. Now, in a private conversation with his ambassador, Narbonne, he let slip evidence of the heights to which his imagination had soared. “After all,” he said of his plans to advance on Moscow, “that long road is the road to India. Alexander the Great, to reach the Ganges, started from just as distant a point as Moscow.” As idle as it may have been, the remark was deeply revealing and essentially flawed. In the first place, Alexander never reached the Ganges, but was forced by his own men to turn back at the Indus; moreover, his words themselves convey no larger sense of strategic purpose. With his own empire anything but secure, the idea of departing the continent to seize so distant and populous a country (a goal that would take the British another 50 years) made little sense. Finally, of course, such a scheme tended to discount the political and logistical difficulty of subduing the Russian Empire.

In any case, the campaign was clearly intended to be a final, unequivocal assertion of his dominance of Europe, and as he set out from Paris in the spring of 1812 there can be little doubt that the Emperor was supremely confident of success. Arriving in eastern Poland in June, he traded his imperial finery for the grey coat and bicorn that had become his trademark on campaign, readily returning from the world of the courtier to the world of the soldier. Stopping to review his troops on foot, he visited with individual demi-brigades, instantly working his charm upon the men. It was a performance he knew well and for which he had lost none of his old magic. After studying the unit’s battle flag to discover which of his great triumphs it had taken part in, he chatted amiably with the veterans of those earlier campaigns, addressing individual soldiers by the familiar “tu” and singling out the worthiest among them for an affectionate tap on the shoulder, a gesture that served to convey personal favor and, in many cases, immediate promotion upon the honored party. Moving on to the recruits, the Emperor was similarly familiar, asking the newcomers if they were being well-fed and supplied, in effect welcoming them to the army and establishing the ineffable bond between himself and his men that had been so much a part of his past successes. Indeed, inasmuch as fully two-thirds of the army was now comprised of foreign troops, such a bond had become all the more important, for it was not as Frenchmen that he could ask them to risk their lives, but as believers in his own invincible genius. His recent portliness adding a new, avuncular quality to his relationship with the soldiery, he spoke of the coming campaign as a great crusade in which the nations of the west would rise up against the vast, barbaric empire of the east, putting an end once and for all to Russia’s regressive influence on European affairs.

With all in readiness, early on the morning of 23 June Napoleon was riding forward to inspect the bridge sites by which his vast army would cross the Nieman into Russian territory when a minor mishap occurred. While making his way down the riverbank in the pre-dawn twilight, he was suddenly tumbled into the sand when his horse lost its footing. “This is an ill omen,” someone (perhaps Napoleon himself) is said to have exclaimed, “–a Roman would turn back!” No doubt the remark relieved the sudden alarm of the moment, occasioning laughter among his attending staff; in years to come, however, the incident would be remembered as a chilling portent of disaster. Soon the first French troops were across the river, reconnoitering for signs of the enemy, but instead of Russian soldiers they were met only by the deep and abiding silence of the Russian wilderness; the campaign would open with scarcely a shot fired. In short order three bridges were erected, and for the next eight days, in scenes reminiscent of Xerxes’ crossing of the Hellespont during the Greco-Persian Wars, the soldiers of the Grand Army made their way down to the shore and streamed across. The vast majority were never to return.