From Monmouth to Newport 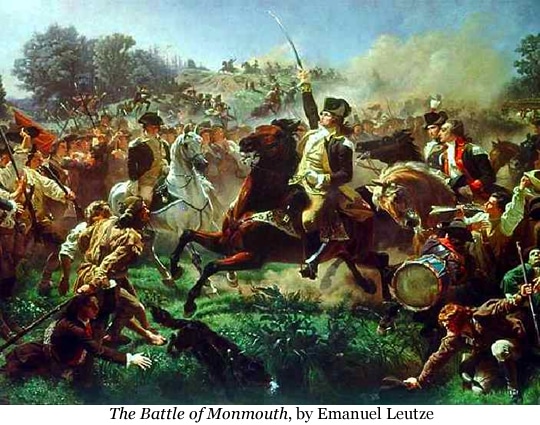 My lords, you cannot conquer America… If I were an American, as I am an Englishman, while a foreign troop was landed in my country, I would never lay down my arms–never–never–never!
–British MP, William Pitt the Younger

While Washington and his army suffered through the winter of 1777-78 at Valley Forge, far from the bleak, cold hills of Pennsylvania a very different kind of struggle had been unfolding for some time. This diplomatic war was being fought in rooms of state in London and Paris and would pull the great empires of Europe into a world war, eventually shifting the balance of power on the fighting fronts of North America. From the earliest outbreak of a shooting war on Lexington Green, the Continental Congress had seen the need for help abroad. Indeed, as Washington wrote, Great Britain’s military, naval, and economic resources were virtually inexhaustible, at least in relation to the scarcely developed strength of the thirteen American states. As urgent as the American need for money and materiel from Europe was, however, Congress had remained for some time reluctant to pursue aid actively. A modest proposal on the part of a few in Congress to open American trade to European powers came to nothing in the summer of 1775. Doing so would in effect be a declaration of independence from Great Britain, and even after the bloody affair on Breed’s Hill, most members of Congress still cherished a belief in a just reconciliation with the mother country. Then too, any kind of alliance with European states, commercial or otherwise, was full of danger. For one thing, America’s likeliest ally was the French empire of Louis XVI, still smarting from her defeat in The Seven Years’ War. France had been slowly rebuilding its naval power and nourishing a desire to settle old scores with Great Britain. And yet, the ancient dictum of organized warfare, that the enemy of my enemy is my friend, did not necessarily apply to the American point of view. First, France was a Catholic state, and the deep anti-Papist feeling that had come ashore with William Bradford’s Pilgrims in 1620 was alive and well in Congress in 1775. Nor could Congress ignore the very real possibility that France, perhaps in union with Catholic Spain, would use a temporary American alliance to reestablish its North American empire. Americans might simply exchange a British tyranny for a French.

Most in Congress continued to oppose any relationship with France beyond a strictly commercial one. As John Adams tersely put it: “1st No Political Connection. Submit to none of her Authority… 2d No military Connection. Receive no Troops from her… 3d Only a Commercial Connection.” It was not an unpromising proposal, for as Thomas Paine noted with laconic wit, there would be eager and active trade in American ports “so long as eating is the custom in Europe.” But the stakes were high, and largely at the urging of Doctor Franklin, Congress in November of 1775 appointed a secret Committee of Correspondence to explore the possibility of foreign assistance. Its sole stated purpose was “corresponding with our friends in Great Britain, Ireland, and other parts of the world,” but its real purpose was to sound out the French, to discover what the French might do to support the American cause and what they would expect in return. Accordingly, Congress dispatched Arthur Lee, brother of Richard Henry, first to London to assess British opinion, then on to Paris to see what might be achieved there. The French of course had been keeping a close and hopeful eye on Britain’s American troubles since the first rumblings of the Stamp Act Crisis. Louis’ very capable foreign minister, Charles Gravier, Comte de Vergennes, had in fact abandoned the idea of regaining France’s lost American empire, but he was willing to consider any move that would safely check the expansion of British power in Europe and secure the lucrative French West Indies. If the French could not regain their American empire, they might push Britain toward the loss of hers.

The key word for Vergennes was ‘safely.’ Just as many Americans early in the struggle hoped for reconciliation with Britain, Vergennes had every reason to fear it. To step prematurely into the contest might well invite an Anglo-American alliance and the prospect of American troops and British warships operating in the West Indies. But if Vergennes was not yet prepared to aid the American cause openly, there was no reason that France could not secretly aid Britain’s enemy and in the meantime assess the progress of American arms (which had thus far given the redcoats two bloody checks and laid siege to Boston). Already weapons and supplies had made their way from French arsenals to America through a private firm, Pliarne, Penet et Cie. When Congress sent another agent, Silas Deane of Connecticut, to the court of Louis XVI, Vergennes was quick to create what was frankly a commercial fiction, the firm of Hortalez et Cie headed up by another skillful behind-the-scenes mover, Caron de Beaumarchais. As the campaigns of 1776 opened in America, a substantial stream of money and supplies was flowing westward to the American struggle.

The trouble both for America and her potential ally was that the summer of ’76 brought nothing but defeat and disaster for American arms. Washington’s army had been very nearly gobbled up whole at the Battle of Long Island and would be beaten from pillar to post before making a stand behind the Delaware in December. But desperate times call for desperate measures. In the autumn of that year Congress, over the strenuous objections of John Adams, now sent Benjamin Franklin to France with a momentous charge: “to press for an immediate and explicit declaration of France in our Favor, upon a Suggestion that a Re-union with Great Britain may be the Consequence of a delay.” France of course understood that such a declaration in America’s favor was tantamount to a declaration of war against England. In effect Franklin’s mission said to France, join us in the struggle against your ancient enemy or we will be compelled to rejoin them. Fortunately for the American cause, Congress could not have made a better choice in its agent than Franklin. In the words of a gifted biographer, he was “the person most feared by the crowned heads of England and many parts of Europe as the most dangerous man in America.” Franklin arrived in Paris in December of 1776 in plain clothes, his hair unclubbed under a simple fur cap, and a walking staff of applewood in his hand. Warmly received by the French, he became their ideal of Rouseau’s “natural man,” an untutored sage from the uncorrupted wilds of North America. This role Franklin played with superb aplomb, but of course, he was no such thing. There was no more shrewdly calculating mind in Europe just now than Franklin’s. Indeed, as negotiations unfolded that winter, Franklin was subtly steering France toward an alliance and a war that the French ministry was not at all sure it wanted. The last European war had exhausted her treasury and stripped her empire of many of its richest prizes. The peace that followed had brought prosperity that few wanted to see squandered in another conflagration.

But Franklin’s arguments in Paris and events in London were pushing France toward just such a struggle. Although Britain had won smashing victories in ’76 and Burgoyne and Howe were on the march north and south in ’77, it seemed to many that Britain was no closer to suppressing the rebellion now than when the shooting started. Nor did anyone in the London ministry or in the high command in America seem to have any coherent strategy by which Britain might use her strength effectively. The best that Sir William Howe (who had given Britain her only victories) could do was to call for an additional 35,000 men, reinforcement that the government lacked the means and the will to give. On 18 November 1777, William Pitt rose and thundered in Parliament: “I know that the conquest of English America is an impossibility… My lords, you cannot conquer America… If I were an American, as I am an Englishman, while a foreign troop was landed in my country, I would never lay down my arms–never–never–never!” Hard on the heels of Pitt’s speech, news of Burgoyne’s disaster at Saratoga reached London on 2 December, and soon thereafter more disheartening dispatches came in reporting Howe’s drawn battle at Germantown. Acutely aware of the negotiations now unfolding in Paris, Lord North’s ministry was beginning to think the opposition was right, that the colonial rebellion probably could not be suppressed–and certainly not if France would soon be a co-belligerent.

Early in 1778 Lord North put before Parliament a last desperate effort to make peace in the empire before a world war blew up once more. The so-called Conciliatory Propositions were complicated, but they touched on virtually every point of antagonism in Anglo-American affairs going back a generation. The document even conceded the most provocative point of all, the right of Parliament to tax the colonies. Lord North was sure that there was “so much affection left in that country [America] toward this, that barely to enter on a discussion is half the business.” It was a hard sell in Parliament that spring. Debate was prolonged and heated, the most intense heat generated by the prime minister’s own party. The Whig opposition took some grim satisfaction in the disarray in the Tory ranks. They at any rate were sure that, while acts of Parliament might make a rebellion, they could not repeal it. In the end, the Propositions passed and peace commissioners were dispatched to America. It was not too little: except for independence itself, the act offered in full measure what most Americans had contended for at the outset of the fighting. But it was too late. Although Congress did not yet know of the fate of the French alliance, it promptly and unanimously rejected the British initiative. On 2 May the Propositions became a moot point: the treaty of alliance that Franklin had worked so patiently and so skillfully to forge reached Philadelphia. On 6 February over the signatures of Franklin, Silas Deane, and Arthur Lee, the United States had pledged common cause with the French against Great Britain. On her part, France guaranteed the independence of America. Neither party would make a separate peace. On 4 May 1778, Congress ratified the treaty and America had won a powerful ally. In point of principle, the treaty took effect only when and if a state of war existed between France and Britain, but that collision was virtually inevitable now. The provincial struggle for republican liberty in America was now pulling the monarchies of Europe into a world-wide imperial conflict. It would be fought from the remote wilderness of the Ohio River country, across the high seas, all the way to far-off Bombay.