IV. MASTER OF THE CONTINENT 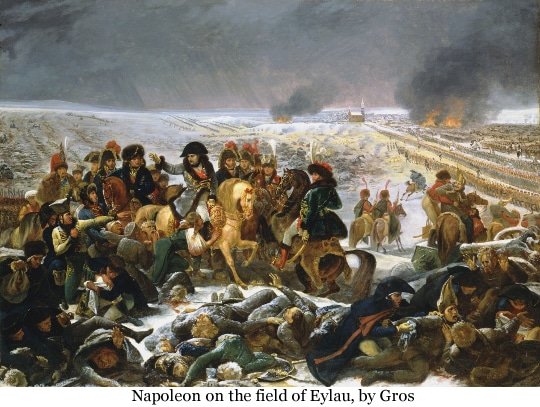 The present epoch takes us back to the age of Charlemagne.
–Napoleon 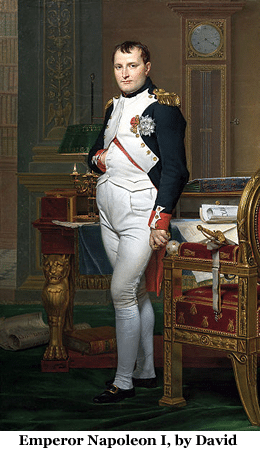 Two days after the Battle of Austerlitz, Napoleon met with his Austrian counterpart, Francis II, in Pressburg (now Bratislava, Slovakia), where a treaty was signed on 26 December 1805. The resulting document required Austria to withdraw from the Third Coalition, cede its holdings in Bavaria and Italy (including Venetia, Istria, and Dalmatia), and relinquish dominion over the German states. With his capital in French hands, the emperor had little choice but to agree to the terms. Taken together, the battles at Ulm and Austerlitz left no doubt about the dominance of French arms, and even though Tsar Alexander refused to ratify the treaty, the Russians had prudently withdrawn beyond the Austrian frontier, thoroughly chastened. Meanwhile, in England, news of the Austrian concessions proved mortal to the prime minister, William Pitt, who died within a month of the signing. A French continental empire, long feared by the English, was now a reality, and the map of Europe was redrawn to reflect the new order. Among the changes, the Holy Roman Empire, a political entity dating back to the time of Charlemagne, was officially dismantled, leaving a patchwork of unaffiliated German states and principalities soon to be incorporated in a French-dominated league.

These developments left Prussia in a particularly awkward position. At the outbreak of the war, the country, alone among the five great powers, had proclaimed its neutrality in the hope that both sides might be weakened by the war, enabling Prussia to step in and assert dominion over the German states. When French forces violated Prussian territory in Ansbach during their rapid advance to the Danube, however, the Prussians secretly made arrangements to enter the war on the side of the Coalition. The problem with this stratagem was that by the time it was decided upon the Austrians were on the run and the opportunity for Prussia to play a meaningful role in the outcome of the campaign had passed. Even so, the subsequent union of Austrian and Russian forces at Olmutz boded well for an Allied victory, in which case the Prussians could expect to benefit from the success of their new-found friends.

Instead, however, the Allies were soundly defeated, obliging King Frederick William III of Prussia to send his congratulations to the victorious French emperor. Napoleon, meanwhile, had been fully aware of Prussia’s duplicity all along and held the indecisive Frederick in personal contempt. (To make matters worse, the Prussians would suffer the humiliation of knowing that their initial intention had been to present Napoleon with an ultimatum immediately prior to the battle, predicated on the assumption of an Allied victory.) As a consequence of all this, Napoleon entered into negotiations with Prussia with a strong moral advantage which not even the amorous overtures of Frederick’s wife, Queen Louise, could convince him to relinquish. The resulting Convention of Vienna called upon Prussia to cede various principalities for use by Napoleon’s favorites (including a number of the emperor’s personal servants). Prussia was also required to renounce all existing treaties in favor of a foreign policy wholly consistent with French interests. Prussia’s one potential reward for this humiliating surrender was the Electorate of Hanover, a substantial prize to be given in exchange for Ansbach and some minor principalities along the Rhine. With triumphant French forces poised on Prussia’s southern border and immediate war with France a clear possibility, the terms were approved and a draft of the treaty signed on 15 February 1806.

When news of the proposed treaty reached England, the British seized all Prussian shipping in English ports, sending Prussia’s commercial interests into a tail-spin and provoking a widespread anti-French backlash. Where once Napoleon had been celebrated by such influential Germans as Goethe and Beethoven, a nascent nationalist movement now emerged in defense of German self-determination and Prussian autonomy in particular. The Emperor responded by indicating a willingness to give Prussia greater authority over the north German states, but by then a pro-war faction within Prussia had coalesced around Queen Louise, whom Napoleon characterized as “the only real man” in the country. Next, contemplating a French-dominated buffer state to be known as the Confederation of the Rhine, he invited the German state of Saxony to join, and, abruptly retracting his offer of Hanover to Prussia, proposed instead to give it to England as a peace offering. The offense to Prussian honor was clear and pointed, and the Prussians responded by preparing for war.

Meanwhile, reinstating the very model of dynastic rule that the French Republic had sought to replace, in the aftermath of his triumph at Austerlitz Napoleon named members of his immediate family to the thrones of France’s new vassal states. To his older brother, Joseph went the Kingdom of Naples. Younger brother Louis became King of Holland, and Eugene Beauharnais, Josephine’s son, assumed the title Viceroy of Italy. Taken together, these appointments highlight a central conundrum surrounding Napoleon’s political philosophy: How could a man who had championed the French Revolution and become a hero of the Republic presume to crown himself emperor and set about the creation of a new hereditary aristocracy? Assuming for the moment that he was not–as many of his more transparent critics have espoused–merely an opportunist focused on advancing his own interests, the answer is necessarily complicated. To begin with, in Napoleon’s view (for which there is much supporting evidence) the French Republic, for all of its high ideals, had failed, only to be rescued from imminent collapse by the coup d’etat of 19 Brumaire. The fact that one man at the head of a small cadre of troops and supporters had been able to bring about its demise only confirmed that failure. As for his placing members of his family on the thrones of Europe, one has only to contemplate the realities of controlling a burgeoning empire within the larger context of European politics to appreciate his predicament. In a region where strategic alliances were subject to constant maneuvering, his first concern had to be for the trustworthiness of the new players, and in his view family represented the clearest model of personal loyalty. The option of establishing republican governments in their stead was not worth considering, having already proven unworkable in Switzerland, where the Helvetic Republic had succumbed to its own revolutionary struggles within two years of its founding.

Finally, Napoleon’s willingness to adopt the trappings of autocracy as well as its forms deserves mention. To be sure, the title Emperor of the French was attended with all the social conventions associated with monarchy, yet it is worth noting that Napoleon consistently used such conventions as a means to enter and ultimately dominate the world of the ruling families of Europe. Though of lowly origins, by casting himself as the social equal of the high-born, he forced a new awareness on his contemporaries, exploding the myth that kings ruled by divine right or vague qualities of innate nobility, and showing them to be eminently fallible (witness his treatment of Frederick William). Thus, the spirit of the Revolution was seen to live on, however vicariously, in the example of his own elevation from obscurity to Emperor. Fully aware of the power of this symbolism, Napoleon set about the creation a new nobility from within the army, granting titles–read large, hereditary incomes–to the most successful of his generals, as well as a wide assortment of honors to the rank and file in recognition of feats of bravery on the battlefield. However aristocratic he appeared to be as a political leader, as commander of the French military he maintained a strict meritocracy in which his own carefully constructed legend served as inspiration.

QUEST FOR EMPIRE: The Napoleonic Wars Text IV. MASTER OF THE CONTINENT