This is what happens when one heaps one mistake upon another!
–Napoleon 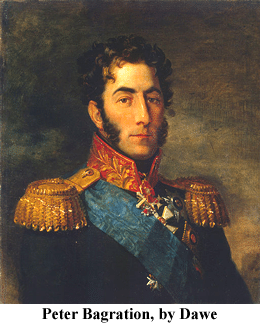 During his preparations for the coming campaign, a careful study of the map of eastern Europe had presented Napoleon with three basic avenues for the invasion of Russia: a northern route across difficult terrain toward the political capital at St. Petersburg; a southern route through the comparatively rich farmland of Ukraine toward the traditional capital, Moscow; and a central route through Vilna and Smolensk, offering the choice to strike either objective. Typically, Napoleon chose the third, leaving his options open as much as possible.

For his part, Tsar Alexander, who had been preparing for war as early as 1810, relied on much the same strategy Peter the Great had employed against the Swedish army in the Great Northern War of 1700-1721. Refusing a pitched battle at the frontier, he sought to draw the French deep within Russian territory, where problems of supply would eventually sap the invaders’ strength. Thus a northern army under Michael Barclay de Tolly was to retire slowly upon a fortified camp at Drissa on the Dwina River. Here, some 150 miles from the Prussian border, Barclay planned to give battle while a southern army under Peter Bagration struck northward against the enemy’s extended line of supply.

Occupying Kovno as early as 24 June 1812, the French vanguard proceeded east against scant opposition, the corps of Ney and Oudinot pressing Barclay back toward Drissa, while Davout proceeded to Vilna and continued southeast toward Minsk in an effort to trap Bagration against a vast expanse of wetland known as the Pripet Marshes. From the first, however, the scope of the campaign and the vast spaces to be crossed tended to work against Napoleon’s opportunistic genius, forcing him to proceed with uncharacteristic hesitation. In order to protect his army’s long logistical tail, he created an initial front over 300 miles long from Brest in the south to Riga in the north. Likewise, his central attacking columns were quickly spread over a wide area in pursuit of the two main Russian armies, whose precise whereabouts remained unknown. By the first of July, Jérôme, whose Army of Westphalia was to make initial contact with Bagration, had advanced no farther than Grodno, leaving Davout dangerously exposed west of Smorgonie. (Already at odds with his staff, Jérôme would relieve one of his corps commanders, Vandamme, for protesting a lack of supplies.)

The Russian response, meanwhile, was even more confused. Within two days of the French invasion of Russian territory, Bagration was talking boldly of an advance into Poland. The breadth of the enemy’s front quickly caused him to reconsider, however, and by the time he started moving to maintain contact with Barclay, his likeliest line of retreat through Minsk was blocked by Davout. Scrambling to escape encirclement, he was forced to detour as far south as Bobruisk, leaving the road open for an enemy advance on Smolensk. Meanwhile, to the north, Barclay had arrived at the fortified camp at Drissa only to decide against making a stand there on account of Bagration’s failure to maintain contact and unite with him. Shortly thereafter, a frustrated Tsar Alexander returned to St. Petersburg, leaving the fate of his empire to Barclay.

As the general disposition of the two Russian armies became clear, Napoleon grew more assertive, ordering Davout to press forward through Borisov to Kokhanovo. At this point, Davout realized that by occupying Mogilev he could force Bagration to give battle and in all probability destroy him. Thus, according to a previous arrangement with the Emperor, he assumed command of the entire right wing of the army and ordered all available forces to prepare for the encounter. When informed that he was to operate under Davout’s orders, however, Jérôme prevailed upon his status as the Emperor’s younger brother and fell into a snit, sending Davout his resignation. The temper tantrum lasted more than a week, during which time Jérôme sat on his hands, refusing to assume command of his troops and obstructing Davout’s efforts to assert control. By the time the affair was sorted out (deeply frustrated, Napoleon would blame Davout for acting prematurely), Bagration was aware of his danger and racing for Mogilev. Jérôme, meanwhile, went back to Westphalia to enjoy the unquestioned authority of a king.

Despite the delays caused by Jerome’s petulance, Davout managed to beat the Russians to Mogilev, where he took up a defensive position south of the town and called in various detachments. On 23 July he came under attack from Bagration’s vanguard and drove the Russians back in furious fighting. With Jérôme’s troops out of position, however, he was unable to engage Bagration’s main force, and the Russian commander slipped south once again, crossing the Dnieper at Stary-Bykhov and making another end run to the east. Two days later (25 July) Murat met and defeated Barclay’s rear-guard at Ostrovno, whereupon the Russian commander–apprised of Bagration’s defeat at Mogilev–abandoned his plans to fight at Vitebsk and fell back on Smolensk.

Napoleon was now faced with a welter of logistical difficulties. Having failed to run either of the main Russian armies to ground, he found himself deep within enemy territory with his forces widely scattered across a broad salient. Compounding his problems, a third Russian army under Tormassov had moved north from a base at Lutsk to threaten the French rear. In response, he sent a single corps (Reynier) south to confront the enemy’s considerably larger force. When warned of the isolated unit’s vulnerability, he grew increasingly irritable and knowingly lied to both Reynier and Davout as a means of temporizing. The incident would be witnessed by an aide and recalled as a rare instance of the Emperor’s apparent befuddlement. In the end, Schwarzenberg–originally ordered to Drissa to support the left flank–countermarched in support of Reynier and drove Tormassov back upon Lutsk, but not before a wave of panic spread throughout the French rear areas.

Recognizing the need to address the logistical problems created by the vastness of the territory he had occupied thus far, on 29 July Napoleon gave orders to consolidate the Grand Army’s leading elements along a more manageable front. Davout was to occupy Orsha and establish a bridgehead across the Dnieper, while Eugène straddled the Dwina at Suraj. The extent of the army’s front would thereby be reduced to sixty miles, enabling both wings to come back under Napoleon’s direct command. Once the new dispositions were made, the army was to rest and refit for an entire week. In fact, the halt had a larger purpose; anxious to precipitate a pitched battle, Napoleon had decided to allow Barclay and Bagration to unite at Smolensk in hopes that they would be encouraged to stand and fight.

By 4 August Bagration had reached Smolensk by way of Mstislavl, and with both Russian armies on hand, Barclay came under enormous pressure from the Tsar and the Russian nobility to repel the invaders. On the 7th, as Napoleon had hoped, the Russian commander ordered a combined advance in the direction of Rudnya, but no sooner had the movement begun than Bagration lost his nerve and called a halt for fear of being outflanked on his right. Over the next few days he and Barclay fell to squabbling over how best to proceed, and between them managed little more than a few ineffectual probes against French outposts. Thus the supreme Russian effort to repel the invaders evaporated in a dissolution of command.

Meanwhile, Napoleon had ordered a movement south of the Dnieper with plans to encircle Smolensk. On the 14th he sent Ney and Murat against Krasny, where their combined force chased a single Russian division out of the town and continued east, halting just short of Smolensk. By the 17th the rest of the army had been assembled south of the city, and the fighting at Smolensk began in earnest. Muscling their way into the city’s suburbs, the French brought up their artillery to hammer the massive walls of the fortress, but the city’s defenses proved formidable and Barclay was able to send sufficient reinforcements to resist the assault. As the French continued to advance eastward along the south bank of the Dnieper, Bagration was ordered to follow along the opposite shore to prevent the enemy from getting across the Russian line of retreat. The departure of much of his force had the effect of weakening Barclay’s already tepid resolve, and on the night of the 17th, to the collective outrage of his general officers, the Russian commander decided to abandon Smolensk and move east as well. He would be slow in going, however, and narrowly escaped disaster when an aggressive French pursuit caught him on the march.

At this point, after two grueling months of continuous campaigning, Napoleon would have done well to take the advice of several of his marshals: establish a forward base at Smolensk, consolidate his gains, and prepare for a fresh campaign in the spring. With Schwarzenberg confronting Tormassov in the south and MacDonald and Oudinot holding the line of the Dwina, his supply line was reasonably secure, and by switching to the defensive he might lure the Russians into another disastrous defeat on the order of Austerlitz. As reasonable as such a plan may have been from a strategic standpoint, however, it could only exacerbate the larger political fragility of Napoleon’s empire, giving his enemies at home and abroad fresh grounds for hope. Besides, there was no clear need for such a pause. Never before had he failed to achieve a decisive victory in a single campaign, and with two good months of campaigning left there was little reason to suppose that he might fail now. Moscow remained the key; the Russians would certainly defend their traditional capital, and a great French victory before the city promised to end the war and silence his enemies once and for all. Indeed, somewhere deep in his thinking, Moscow had become a kind of holy grail, promising to redeem the past and open the way to India. And so he pressed forward.

Meanwhile, Barclay’s Fabian strategy had finally exhausted the patience of the Tsar and the Russian nobility, and on 29 August over-all command of the Russian forces passed to the aging Mikhail Kutusov. Under the circumstances the appointment was scarcely enviable; worn-out by hard marching in the wrong direction, the Russians were thoroughly demoralized and beginning to desert the ranks in droves. Kutusov did what he could, sending Tormassov back on the offensive along the Austrian frontier while he developed plans for the two main Russian armies–still under the commands of Barclay and Bagration–to unite on the south bank of the Kalatsha River, where a series of defensive works dominated by a central fort were under construction near the village of Borodino. Here, some 72 miles west of Moscow, the Russians would at last turn and meet the invaders in a supreme test of arms. On their side, they could count more and heavier guns, while the French would field slightly more men and a reputation for invincibility.