5) Sherman at the Gates

I knew more of Georgia than the rebels did.
–William T. Sherman 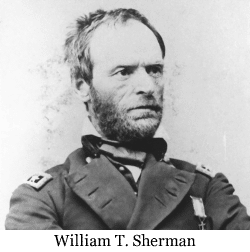 While Lee and Grant battled across the war-ravaged Virginia countryside during the long, punishing summer of 1864, the war in the west would prove equally desperate. Placed in charge of the Federal forces at Chattanooga following Grant’s promotion, William T. Sherman set about consolidating his position preparatory to an advance southward against the one city–short of Richmond itself–that represented the greatest prize of the war: Atlanta.

William Tecumseh Sherman was a tall, wiry Westerner, red-haired and rusty-bearded. He was as volatile as Grant was stolid, as voluble as Grant was taciturn; he was brilliant, erratic, and inexhaustibly energetic. His instructions, as he understood them, were “to knock Joe Johnston, and to do as much damage to the resources of the enemy as possible.” The force he had gathered at Chattanooga to do the knocking was formidable. The heart of it was George Thomas’ Army of the Cumberland, 60,000 strong, the hardheaded veterans who had held their ground at Chickamauga Creek and gone up Missionary Ridge in a relentless rush. It had been bolstered by two corps from the Army of the Potomac, the XI and XII, now reorganized as the XX Corps. The wings of Sherman’s strike force were two smaller armies, corps more properly: John Schofield’s Army of the Ohio, 25,000 men, and the 13,000 men of James B. McPherson’s Army of the Tennessee (which had been Sherman’s and Grant’s before him). Youthful and handsome, McPherson was thought by both Grant and Sherman to be one of the Union’s most capable and promising field commanders. The armies were fit, well-supplied, and supported by more than 250 guns. On the face of things, their only vulnerable point was their long logistical tail that ran by rail from Chattanooga north to Nashville and ultimately all the way to Louisville on the Ohio River. A good three hundred miles of track had to be defended from Rebel thrusts in Sherman’s rear. Sherman professed not to be worried on that score. He had road gangs trained and ready to repair track, and his armies would travel light and move fast. As Uncle Billy told an officer in the quartermaster corps, “if you don’t have my army supplied, and keep it supplied, we’ll eat your mules up, sir; eat your mules up!” If worse came to worst, the Yanks would eat what Georgia produced. If a million Georgians ate well enough, he reasoned, “we should not starve.”

Responsible for the defense of Georgia–and most particularly Atlanta, the Gate City of the South–was Joseph Eggleston Johnston, a genial Virginian with sharp bird-like eyes, a moustache and a bit of greying chin whiskers. He looked every bit a soldier, as careful of his appearance as Sherman was careless of his. He had been Jefferson Davis’ most reluctant choice to command the Army of Tennessee after Braxton Bragg’s remarkable mismanagement of it, but he had spent the winter wisely in Dalton, seeing to it that his men were adequately fed and equipped as well as the Confederacy could afford. He restored order, discipline, and morale to an army much consumed by internecine strife. Beyond question, his men loved him as passionately as they had despised Bragg. One thought that there was not “a soldier in his army but would gladly have died for him.” He had at Dalton nearly 45,000 men of all arms, a force which included Joe Wheeler’s cavalry and 138 guns. They were organized into two corps under two capable commanders: William J. Hardee and John Bell Hood, just recovered from the loss of a leg at Chickamauga. It was none too strong a force to confront Sherman’s legions, however, and accordingly, Johnston called on Davis (through Bragg) for at least one division from Leonidas Polk in north Alabama. For once, Johnston got what he asked for, not only immediately but more than he bargained for. Just as Sherman’s war machine was getting in motion up the track, Polk’s entire corps (less 2,000 garrisoning Selma) was on its way by rail to the Army of Tennessee. With Polk’s 19,000 men and 50 guns, Johnston would have very nearly 65,000 effectives and not quite 200 guns. When Sherman’s 10,000 reinforcements came in from their reenlistment furloughs, the Yankees would have a two-to-one advantage in numbers but Joe Johnston would have several offsetting advantages. First was north Georgia itself. Rugged, wooded, and mountainous, it was good ground to defend. Further, if Sherman was going to fight his way into Atlanta, he would have to cross three major rivers to do so. Then, too, the farther Sherman advanced the longer and more vulnerable was his line of supply. An opportunity to strike his rear must sometime arise, Johnston believed. Finally, there was Joe Johnston himself, a crafty tactician who was prepared to yield almost any position for one opportunity to strike a crippling blow at some part of a larger foe.

FATEFUL LIGHTNING: The Civil War Text VI. EVERY DAY AND EVERY HOUR 5) Sherman at the Gates