VII. LET THE THING BE PRESSED

From Petersburg to Appomattox 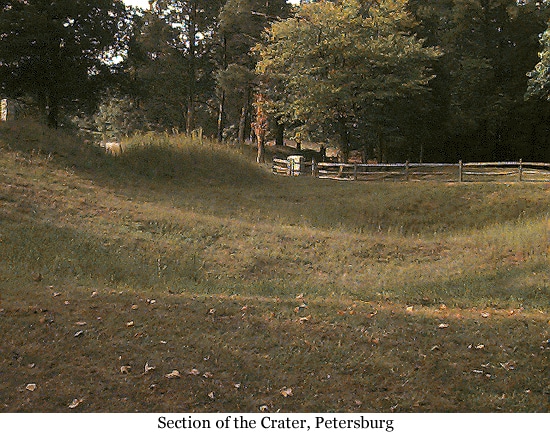 If the thing is pressed I think that Lee will surrender.
–Philip Sheridan

Human history, wrote one wise observer, is littered with wars that no one expected to happen. The American Civil War is no exception. Although a half-century of sectional strife had strained the old Union, negotiation and compromise–the genius of the American system–might well have averted the scourge of war. But in an evil hour that gift for compromise had been squandered by flinty men North and South beyond all thought of compromise. Thus, the vexed question of slavery and the sovereignty of the states had come to be tried by “the experiment of war.” Now in its fourth summer of battle, the war seemed to run on with a destructive dynamic of its own, far more terrible than all but a prophetic few had imagined in the far-off days of Sumter. Though volatile convictions still divided North and South, by the summer of 1864 the mass of men and women on both sides shared this much: a deep weariness of the spirit and a deeper longing for peace. About the same time Mary Chesnut was confiding her despairing vision of the South’s imminent destruction to her diary, inconstant Horace Greeley was writing to President Lincoln: “Our bleeding, bankrupt, almost dying country longs for peace–shudders at the prospect… of new rivers of human blood.” Greeley had perhaps forgotten that his editorial voice was in some part responsible for those bloody rivers. Certainly his had been as loud as any in the first clamorous call of “On to Richmond!”

Several overtures for peace there were in the summer of ’64, initiated by both sides of the trial, and these briefly lifted hopes. When peace commissioners passed through the lines at Richmond, it was quite impossible to tell whether boys in blue or butternut cheered more wildly. In the end of course these gestures were no more than fleeting hopes. Indeed, it is hard to see how they might have been otherwise so long as each side was unwilling to compromise on its core convictions. Lincoln insisted that there could be peace with amnesty when–and only when–the South embraced a restored Union and abolition. Jefferson Davis insisted with equal firmness that there would be no peace without Southern independence. “We are fighting for INDEPENDENCE,” he wrote, “and that, or extermination, we will have… We will govern ourselves… if we have to see every Southern plantation sacked, and every Southern city in flames.” A terrible compulsion gripped the land. The struggle had gone on so long and each side had suffered and sacrificed so terribly that turning back now from even more suffering and sacrifice seemed impossible to many. For either to yield now would mean that all the blood and treasure thus far spilled out had been in vain. Thus, the experiment of war would continue until one side utterly exhausted the other’s capacity or will to endure the contest. To at least one the war must be endured because it was no less than the working out of God’s Providence itself. An escaped slave who came into the Union lines in front of Petersburg told a soldier in Wright’s VI Corps that the South was doomed. Though the man could neither read nor write, he was sure that Scripture prophesied its fall. Consulting his own Bible, the soldier believed he found the prophecy in the Book of Daniel: “In those times many shall rise against the king of the south… Then the king of the north shall come and throw up siegeworks, and take a well-fortified city. And the forces of the south shall not stand, or even his picked troops, for there shall be no strength to stand.” In the end, the king of the north will rush upon the king of the south “like a whirlwind, with chariots and horsemen, and with many ships… and he shall go forth with great fury to exterminate and utterly destroy.”