VII. ALL OR NOTHING 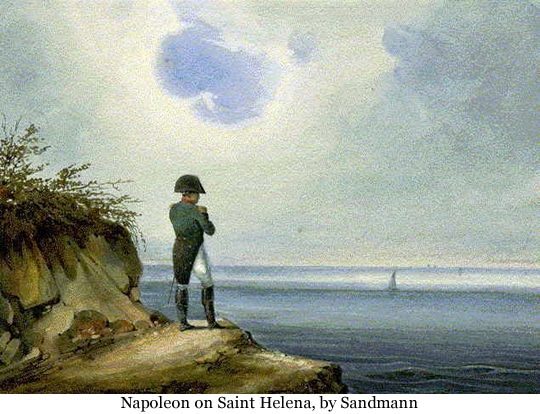 Like a man that should build upon cloud; his house and he fall down
in confused wreck, and depart out of the world.
–Thomas Carlyle 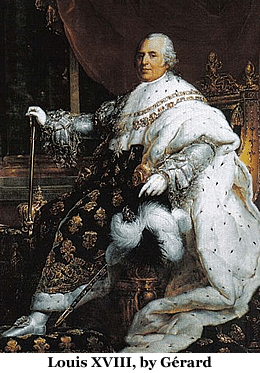 Following Napoleon’s abdication in April 1814, Bourbon rule in France was restored in the person of King Louis XVIII, brother of the former king, and longtime exile from France. Since escaping the turmoil of the Revolution, the Bourbon heir had been living obscurely in various royalist strongholds in England and on the continent. Now sixty, ponderously overweight and crippled by gout, he returned to Paris on 3 May and sought to calm the political waters with the words “nothing has changed in France, except there is one Frenchman more.” All too quickly, however, the king found himself embroiled in controversy. Having granted a series of popular reforms as a precondition to this return to power, he no sooner ingratiated himself with the lower classes than he was besieged by throngs of returning royalists indignant over the loss of their wonted privileges and clamoring for a return to the old order. In an attempt to placate both ends of the political spectrum, Louis drew up a new constitution, which he presumed to “grant” to the nation on 14 June. Though the document expressed many of the more enlightened views of the age, the symbolism of its being granted by the king rather than adopted by the people served to arouse the animosity of liberals, while its very existence stood as an affront to the notion of royalty. Thus the familiar fault lines of Revolutionary politics reemerged with all of their rancorous complexity. At the same time, old dissensions among the European monarchies threatened to leave Louis without a reliable source of allies and support.

Meanwhile, with the expectation that Marie-Louise and his son would soon be visiting him, Napoleon busied himself with a number of improvements on Elba, preparing to lead a simple life in which he would spend much of his time writing and reflecting on his career. Months passed, however, with no word from his wife, and by the end of the summer, it became clear that his enemies had no intention of allowing the reunion. Instead, still fearful of Napoleon’s hold on the French imagination, Talleyrand had been actively seeking to deconstruct his legend. Long caricatured in the English press, the deposed emperor now became the subject of slanderous stories and cartoons in various Bourbon newspapers, including reports that he had become involved in an incestuous affair with his sister, Pauline, who, along with his mother, Letizia, had joined him in exile. At the Congress of Vienna, where the Allies met to divide the spoils of victory, Talleyrand sought–not without reason, as it turned out–to convince the attending diplomats that Napoleon’s proximity to the European mainland presented an ongoing threat to peace, eliciting various proposals to remove him to the Azores or possibly as far as St. Helena in the South Atlantic. Napoleon’s large bodyguard still presented a formidable obstacle to such an attempt, but as head of the provisional government, Talleyrand was able to withhold pension monies stipulated in the Treaty of Paris and managed to tie up much of Napoleon’s personal fortune as well. With only the resources of Elba to supply him with an income, the former emperor would eventually be forced to dismiss many of the troops that had accompanied him into exile, at which point he could be forcibly removed or simply assassinated.

Even as his enemies stepped up their efforts to get rid of him, however, the French people began to long for Napoleon’s return. Despite promises of peace and the preservation of democratic reforms, the restored Bourbon monarchy quickly revealed its reactionary inclinations, supplanting the tricolour with the white flag of the Bourbons and banning the singing of the stirring Revolutionary anthem, La Marseillaise. Though denied claims to their former estates, returning emigres were routinely given the most coveted positions in the various offices of government, and the old social order of pre-Revolutionary days soon began to reassert itself. Above all, perhaps, the figure of the corpulent, gout-ridden king–much of whose life had been spent among France’s former enemies–did little to inspire the loyalty of his subjects, and amid indications of a gradual return to the feudal arrangements of the past, the population grew increasingly restless.

At the same time, on Elba, Napoleon’s hopes of achieving a measure of domestic contentment were quickly proving illusory. Ever since his abdication, he had counted on the goodwill of his father-in-law, who, he felt sure, would restore his wife and son to him. Such confidence was entirely unfounded, however, and Francis’ refusal to intercede on his behalf came as a great disappointment. An even greater blow came at the end of May 1814, with news of Josephine’s sudden death from diphtheria. Despite his remarriage and the fulfillment of his longing for an heir, his first wife had never been far from his thoughts, and the news of her death weighed him down with grief. Later that summer his spirits were revived somewhat by the arrival of a letter from another former lover, the “Little Patriot,” Marie Walewska. Her husband having died, Marie wrote to ask whether she and her son, Alexandre, might visit him on the island, to which Napoleon agreed on the condition that the visit be kept strictly secret. On 1 September, Marie, along with her sister and brother and four-year-old Alexandre landed unobtrusively in the harbor at Portoferraio, where they were met by an officer of the Guard and escorted to a mountaintop hermitage in the island’s interior. Napoleon was waiting for them there, and spent the next two days happily reconnecting with his former mistress and their son, who called him ‘Papa Empereur.’ When Marie asked if she might make her home somewhere on the island in order to be near him, however, Napoleon said no, refusing to scandalize the islanders (and his own increasingly vulnerable reputation) with an appearance of impropriety.

In France, meanwhile, an active underground movement had arisen, taking as its symbol the violet in token of the wished-for return of Napoleon with the coming spring. When word of the movement reached Elba through a network of informants, Napoleon at first paid little attention to the scheme. Unable to find an apt historical precedent for a return to power and well aware of the difficulties involved, he scarcely considered such a thing possible. During the first weeks of January 1815, however, fresh reports of a groundswell of popular support for his return served to change his mind, and over the next several weeks he began to formulate a plan to escape his island prison and sail to the coast of Provence, where he might make his way north in hopes of rallying the army to his side. By the middle of February, he determined to make the attempt, and a total of seven vessels were ordered to be provisioned and readied to transport his entire force (somewhere between 600-800 men) to the mainland. While these preparations went forward, he put the troops to work on a number of housekeeping tasks on the island in order to fool enemy spies.

At dusk on 26 February, all the necessary arrangements made, the flotilla put to sea, the individual vessels sailing at intervals to avoid suspicion. The next day, aboard the lead ship, Inconstant, Napoleon narrowly escaped discovery when a French guard ship came within hailing distance and made inquiries. Coached by Napoleon from below decks, the captain managed to allay any suspicion of what was afoot, and the guard ship sailed off without further investigation. On the 28th the Inconstant rendezvoused at sea with the rest of the Elban fleet and made landfall in the Golfe Juan, near Cannes. Once ashore, the tiny invasion force quickly started inland along a route leading into the mountains, the better to conceal their movements. It was the first of March, 1815; the period known as the Hundred Days–it would actually span 136–had begun.

QUEST FOR EMPIRE: The Napoleonic Wars Text VII. ALL OR NOTHING