From First Bull Run to Shiloh 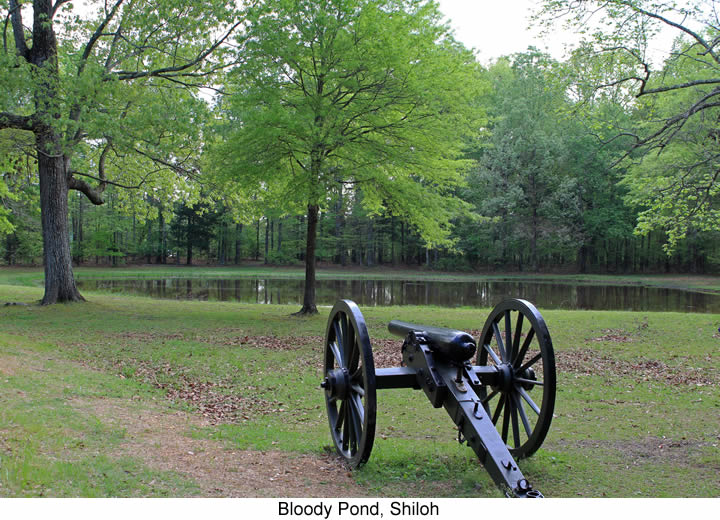 You are green it is true. But they are green also. You are all green alike.
–Abraham Lincoln to Irvin McDowell

In the spring of 1861 General Irvin McDowell commanded what was then called the Department of Northeastern Virginia and made his headquarters at Arlington, until very recently the residence of Colonel and Mrs. Robert E. Lee. McDowell was a West Pointer who had served competently on Winfield Scott’s staff and, although he had never held a field command, he had earned the respect of his colleagues for his energy and intelligence. He was a strange personality in some ways. He was, for example, gluttonous about food while absolutely abstemious about coffee, tea, tobacco, and alcohol. Once, when stunned in a fall from a horse, he had, even unconscious, clenched his teeth tightly to prevent a surgeon from reviving him with brandy. But whatever his quirks, he was probably as good a choice as Lincoln could have made, and McDowell might have had better luck than he did.

By the end of June, McDowell commanded about 35,000 Federal troops in the Washington area and had orders to use them against the Confederate forces gathered twenty-five miles southwest in and around Manassas Junction. As far as McDowell was concerned, he had a perfectly good plan–a proposal to strike Beauregard by flank attack at Manassas–but no proper army to execute it. On June 29 in conference at the White House, he said simply, “This is not an army. It will take a long time to make an army.” He urged Lincoln to delay at least long enough to train the three-year volunteers. Winfield Scott didn’t want to fight on the Virginia front at all. He argued for his Anaconda Plan and an expedition down the Mississippi to New Orleans in the fall. But Quartermaster-General Montgomery Meigs put a hard and simple reality on the table: “I [do] not think we would ever end the war without beating the rebels. It [is] better to whip them here.” Lincoln was persuaded. Although he had no firm intelligence about the fitness of the Confederate forces, he supposed they could be no better prepared for battle than his own. Thus on July 16, four days before the Confederate Congress was to meet in Richmond, McDowell started his 35,000 recruits down the hot, dusty roads that led to Manassas.

At Manassas 20,000 Confederates were gathered under the command of Pierre G. T. Beauregard, the handsome Louisiana Creole already famous for the conquest of Fort Sumter. Like many of his fellow officers on both sides, Beauregard liked to strike Napoleonic poses and had a Napoleonic confidence to go with both the poses and his early success. Even as McDowell was making his plans, Beauregard, McDowell’s classmate at West Point, was eager to be attacked: “If I could only get the enemy to attack me… I would stake my reputation on the handsomest victory that could be hoped for.” Not far away in the Shenandoah Valley was General Joseph Eggleston Johnston with a force of about 11,000. If Johnston’s force from the Valley could join Beauregard’s in time to strike McDowell together, Beauregard had an excellent chance to win his handsome victory.

The task of keeping Johnston in the Valley fell to General Robert Patterson, and here the Federals made their first fateful misstep. Patterson had led volunteers capably in both the War of 1812 and in Mexico, but at age sixty-nine he was past his prime. Still, he might have been better served by clearer direction from that other old soldier from the Mexican War, General-in-Chief Winfield Scott. Patterson’s 14,000 troops were camped around Hagerstown, Maryland, and Patterson understood that he was to use them to keep Johnston at bay. What Patterson did not understand was precisely how he should accomplish that end. Scott had told him to maneuver against Johnston, but at the same time not to risk his command in a pitched battle. In the end, about all the fighting Patterson did was a brief skirmish against Johnston’s flamboyant cavalryman, J. E. B. Stuart, around Bunker Hill, Virginia. Then, thoroughly confused by Stuart’s feint and Scott’s ambiguous orders, and properly worried about his ninety-day men whose time was nearly up, Patterson withdrew toward Charlestown. By July 19 he had maneuvered to a position twenty miles from the main body of Johnston’s army. Johnston knew a good chance when he saw it and seized it immediately. From Winchester, he marched down to the railroad at Piedmont and put his men on cars headed for Manassas.

At this point McDowell had time to reach Manassas and fight Beauregard before the latter could be reinforced. The Confederates were after all just twenty-five miles away. But, as he told Lincoln, his force “was not an army,” and its first hard march would prove it. Later in the war, when officers and men had learned their trade, troops would make such a march from dawn to dark. On this march, though, there would be a good deal of cheering and martial music, but not a good deal of progress. McDowell has been justly called a hard-luck general. Although he had never held a field command, he was leading now the largest army ever assembled on the continent. In his army were regiments he had never seen, soldiers who had never fired a musket, commanders of regiments who had never maneuvered in a brigade. The Pennsylvania soldier who described his regiment as a mob unfit for battle would find his judgment generally confirmed throughout the Federal army. In the fierce July heat and the dust of an army on the march, soldiers fell out of column to draw water, pick blackberries, and boil coffee. Some raided gardens, stole chickens, looted empty houses. The first shots of the Battle of Bull Run were fired at unlucky hogs along the line of march. Regiments strung out and straggled, or, worse, stood sweating in line while traffic ahead was sorted out. It took an entire day for the head of McDowell’s column to reach Fairfax Court House. On the second day of the march his army was already so worn it made just six more miles to Centreville.

While McDowell was making his laborious way down to Manassas, Beauregard was putting his time to good use. (He had been seasonably informed of the Union advance by the good offices of Rose O’Neal Greenhow, Washington socialite and Confederate spy, although the Washington newspapers were nearly as informative as a whole network of spies.) Beauregard drew his 20,000 up in an eight-mile arc on the west bank of a sluggish, wooded creek named Bull Run. When the collision came, Beauregard would have at least two advantages: first, his army hadn’t been three fiercely hot days on the march to reach the fight, and second, it would do most of its fighting on the defensive, an easier business for green troops to manage.