From Liberator to Warlord 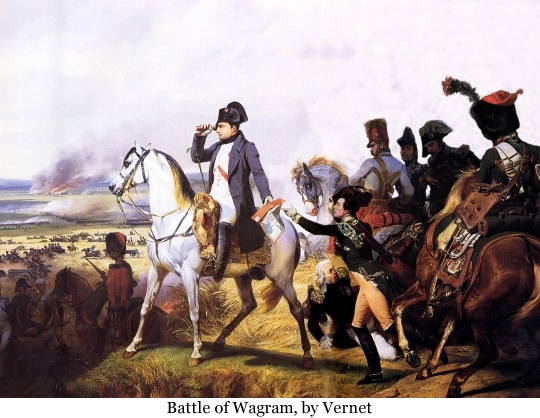 Men are lead through baubles. But it is not everyone who can appreciate honors alone, –a little cash doesn’t hurt.
–Napoleon

Following the Treaty of Tilsit, the heroes of the battle of Friedland returned to France, where they paraded through the streets of Paris in their splendid uniforms, commanding the admiration and respect of the French nation. Their achievements had indeed been remarkable. Since taking the field in September of 1806, the Grand Army had fought a major battle in Saxony, occupied the whole of Prussian territory, and continued eastward to defeat the Russians on their very doorstep. Such successes had not come without a heavy cost in casualties, however, the staggering losses at Eylau alone creating such a sudden and pressing demand for replacements that new recruits had been rushed into service well ahead of schedule. Scarcely more than boys, many of them would never return, and their loss would leave a lasting bitterness among the populace. After years of costly sacrifice, the French people were growing tired of war.

In response, Napoleon, who had long argued that “war should pay for war,” began applying the theory to the army’s human as well as material resources, filling the ranks of his depleted units with growing numbers of foreign conscripts. While foreign-born recruits were by no means new to the Grand Army, in the past they had always served in predominantly French regiments. The steady drain on manpower brought about by the campaigns of 1806-7 would change this pattern such that by the time of the battle of Friedland whole units were comprised entirely of Saxons and Poles, with large contingents of Italian, Dutch, and other nationalities intermixed. It was a trend that would only increase with time, as French armies, like the Roman legions of antiquity, became increasingly comprised of troops from conquered or allied territories. To be sure, the example of the Roman Empire had long served as a particular inspiration for Napoleon, yet the empire of the Caesars would prove a poor model for the latter-day empire of the French. One reason for the success of Rome’s legions, after all, lay in rewarding foreign-born conscripts with Roman citizenship, a privilege that helped create a unifying sense of culture and belonging within and among conquered populations. No such dynamic existed in Napoleon’s empire, however; to the contrary, the constituent peoples of that empire quickly developed a thirst for independent national identities of their own. A fatal flaw in Napoleon’s scheme of conquest lay in the very forces that had brought it into being, forces that could scarcely be made to serve the cause of a unified continental empire. Thus, the era of peace Napoleon thought to have achieved with the defeat of the Russians at Friedland would quickly prove illusory, and while he continued to present himself as the liberator of Europe, his role more nearly resembled that of a warlord.