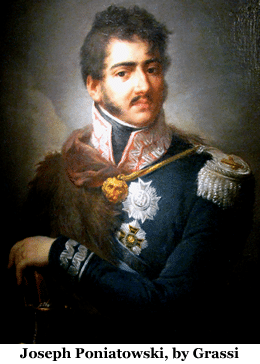 Though Napoleon’s defeat of the Austrians at Dresden (late August 1813) had proven once again his mastery of strategic maneuver, the relative weakness of his cavalry arm and the presence of large enemy armies on three separate fronts clearly diminished his offensive capability, making his situation precarious at best. By the first week of October, Blücher had crossed to the west bank of the Elbe to link with Bernadotte north of Leipzig, at which point the two Allied commanders fell to quarreling about what to do next. On 8 October the approach of two French columns under Ney forced Blücher to withdraw, but instead of retiring eastward the stubborn Prussian commander started in the opposite direction, cutting across the French rear to Halle. The decision altered the strategic situation considerably, forcing Napoleon to shift his front and seriously threatening his already tenuous line of supply.

On the 11th Napoleon started four corps north from the vicinity of Duben with orders to cross the Elbe at Wittenberg and cut the enemy’s line of retreat through Rosslau. Catching one of Bernadotte’s isolated corps near Dessau, the French sent it fleeing north for Berlin. Meanwhile, pursuing a strategy of withdrawal in the face of concerted French attacks and advance where the enemy was weakest, Schwarzenberg extended his left northwest from the Austrian frontier, making contact with Blücher at Halle. By this means the Allied strategy was implemented with ratchet-like efficiency, drawing an ever-tightening noose around the French. Now completely encircled, Napoleon had little choice but to concentrate his forces as quickly as possible and fight a decisive battle.

By the 15th the French emperor had drawn up his corps in and around Leipzig, where the confluence of the Luppe, Elster, and Pleisse rivers divided the approaches to the city into distinct sectors. To the north, Ney with some 50,000 men would defend against the advance of Bernadotte and Blücher, while south of the city Napoleon massed the bulk of his troops, approximately 100,000 men. With these, he would fix Schwarzenberg in front while another 20,000 men under Marshal MacDonald moved southwest from Eilenburg to envelop the Austrian right, at which point a large reserve centered on the Guard would drive them off to the south. The trick, of course, would be to deliver the most men to the critical sector the soonest, and with Allied reinforcements in the form of Bennigsen’s army of 70,000 on the way from Dresden, there was no time to lose. Early on the morning of the 16th, anxious to achieve overwhelming superiority against Schwarzenberg, Napoleon ordered Marmont’s corps to move from its prepared defenses northwest of the city to the decisive sector in the southeast. The movement had no sooner begun, however, than Blücher’s vanguard made its appearance along the road from Halle, forcing Ney to retain Marmont’s large force and send a lesser corps under Bertrand in its place. Meanwhile, with Blücher advancing on their original positions, Marmont’s troops were forced to redeploy along a new line running from Mockern to Eutritszch.

About 8 a.m., in rain and fog, the battle began in earnest with an Allied advance along a broad front south of the city. Advancing across a quadrant of small plots and marshy ground between the Luppe and the Elster, Austrians under General Gyulai closed in on Lindenau, while another Austrian force under Meerveldt moved upon Connewitz. Elsewhere Allied attacks along the southern front lacked coordination and were turned back along a line running from Markkleeberg to Liebertwolkwitz. Around 10:30 Gyulai’s corps battered its way into Lindenau, to which Ney responded by directing Bertrand’s corps–still making its way south in compliance with Napoleon’s call for Marmont–to retake the western suburb. Though Bertrand readily drove Gyulai’s forces out of the town, in crossing west of the Elster he effectively took himself out of the main battle, and thus Napoleon’s original call for 20,000 men would go unanswered.

Nevertheless, with MacDonald newly arrived on his extreme left, Napoleon ordered a massive counter-attack. Eager to prove themselves after their poor performance against Blücher, MacDonald’s troops swept forward to envelop the enemy’s flank, gaining the strategic Kolm Berg and setting in motion a general advance along the entire front. Driving the enemy back more than a mile, the Grand Army once more revealed the elan of old, pressuring the Allied center to the breaking point. At a critical moment, however, the French cavalry commander, Latour-Maubourg, was badly wounded, and in the ensuing confusion, the enemy was able to restore a measure of control. With the help of reinforcements, the Austrians counter-attacked on their left, pushing Poniatowski and Augereau back into Markkleeberg. With part of Meerveldt’s force still east of the river at Dolnitz, Poniatowski was now obliged to turn and clear the enemy from his rear. Meerveldt himself was captured in the attack and much of his force driven into the river at the point of the bayonet.

Meanwhile, Blücher had spent much of the day entrenched north of the city in fear of the arrival of additional French troops from the direction of Duben. About 4 p.m., still wary of an attack against his left flank, he attacked Marmont, driving him out of Mockern and Eutritsch in bitter fighting. The French quickly regrouped in the vicinity of Gohlis, however, and on both fronts, the day’s fighting sputtered out with the opposing armies locked in a stalemate. At this point, Napoleon sent the captured Meerveldt back to Austrian headquarters with an armistice proposal. The French failure to score a strategic advantage made the timing less than propitious, however, and the offer was read as a sign of weakness. With Bernadotte and Bennigsen yet to arrive with a total of some 150,000 reinforcements, the Allied commanders quickly determined to carry on the fight. Even so, the 17th passed with little fighting as both sides consolidated their positions and prepared for the battle’s final action.

On the morning of the 18th, with Bennigsen coming up on Schwarzenberg’s right and Bernadotte soon to arrive on Blücher’s left, Napoleon recognized the futility of his situation and prepared to withdraw to the southwest. With a single bridge providing the sole avenue of escape to Lindenau, the army would be forced to make a fighting withdrawal on the order of the harrowing escape at the Beresina. Nevertheless, drawing in his defensive perimeter, Napoleon called upon Bertrand to drive Gyulai’s corps from the main road to Weissenfels, clearing the army’s escape route. He then set about orchestrating the army’s movements through Leipzig as the enemy closed in on all sides. Late in the day, the newly-arrived Allied forces of Bernadotte and Bennigsen made a concerted effort against the eastern perimeter but were held in check in heavy fighting.

With the onset of darkness, the movement of troops and supplies that had begun early in the day became a steady stream as French columns funneled into the city to create a massive traffic jam along its narrow streets. Throughout the night unit after unit made their way along the narrow causeway without the aid of lights that might reveal their movements to the enemy, and by morning as much as two-thirds of the army had crossed. With the renewal of Allied attacks, the situation in the city grew desperate as the remaining French troops rushed to cross the bridge before the enemy could seize it and follow in their wake. To prevent this, the bridge was to be destroyed by a well-timed demolition, yet with enemy shells beginning to land nearby, the French colonel assigned to oversee the operation turned responsibility over to one of his corporals and fled. Panicked by the sudden departure, the corporal blew up the bridge while troops were in the midst of crossing, killing dozens outright and stranding as many as 15,000 others. In the ensuing chaos, Marshal Poniatowski, who had been placed in charge of the army’s rearguard, was set upon by enemy horsemen and drowned while attempting to swim the river to safety.

Known as the “Battle of the Nations,” Leipzig had a profound and immediate effect on European affairs, shattering once and for all the myth of French invincibility against which the Allied armies had struggled for so long. With Napoleon in retreat, the Austrian diplomat, Prince Metternich, set about winning the larger propaganda war as well. In a carefully-crafted diplomatic initiative designed to undermine Napoleon’s credibility in France, Metternich placed blame for the war not on the French people, but on the unrestrained ambitions of their emperor, who–far from liberating Europe from oppressive monarchies–had himself become the true oppressor, subjecting the entire continent to his egotistical ambitions and sacrificing hundreds of thousands of lives in pursuit of world domination.

Meanwhile, falling back upon a well-supplied base at Erfurt, Napoleon quickly reorganized and refitted his exhausted troops with plans to carry on the campaign in Saxony; however, the general defection of the German states and the presence of Wrede’s Allied army in his rear forced him to continue the retreat all the way to the French frontier. Thus, leaving Erfurt on 24 October, the Grand Army raced westward, driving off the last threat of encirclement in savage fighting at Hanau. Now in the clear, they stormed through Frankfort and were soon safely across the Rhine at Mayence.