3) Decision on the Danube 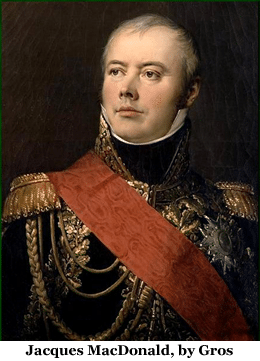 In the wake of the battle of Aspern-Essling, news of Napoleon’s defeat was trumpeted throughout Europe, and anti-French sentiment instantly revived. Prussia began secret negotiations with Austria, and Tyrolean insurgents stepped up their activities in the French rear. Even the Pope grew bold, issuing a bull of excommunication against the French emperor (for which the Supreme Pontiff would be arrested and held captive in Savona). In the two decades since the French Revolution, the ideological conflict between revolutionists and reactionaries, royalists and republicans, seemed scarcely to have diminished, transmogrifying rather into a continent-wide war between Bonapartist and anti-Bonapartist factions.

Meanwhile, in front of Vienna, both sides scrambled to assemble all available forces for another major engagement. Initially digging in along a line running through Aspern and Essling, Archduke Charles called upon his brother, Archduke John, to occupy Pressburg and prevent the enemy from crossing the Danube and striking his flank. The movement would have a downside, however, freeing up Prince Eugène’s Army of Italy, which moved north to join Napoleon’s burgeoning forces in and around the Austrian capital. In response to these developments, Charles withdrew the bulk of his forces to the Wagram Plateau, whose heights provided readily-defensible ground and commanded broad fields offering plenty of room for his cavalry. With John’s army poised to strike from the east, the new position promised to contain the French along a narrow bridgehead with their backs against the river. By failing to make a preemptive strike on Lobau Island, however, Charles allowed the enemy to make his own preparations largely unmolested.

Napoleon made the most of the time, planning to circumvent the Austrian defenses at Aspern-Essling by debouching from the east side of Lobau and breaking out to the north. Initially scheduled for 15 June, the advance was delayed to allow Marmont’ corps to arrive from Illyria, and two weeks later on 4 July French assault forces seized several key islands between the eastern side of Lobau and the mainland. That evening, in the midst of a violent thunderstorm, an initial crossing was made against scant enemy opposition, and early on the morning of the 5th, with several bridges in place and a firm foothold on the north bank, a total of six French corps began streaming across and fanning out to the north. Throughout the morning and afternoon, the massive French assault succeeded in pushing the first line of Austrian defenders back in a wide arc stretching from Leopoldsdorf in the east to Leopoldau in the west. With evening fast approaching, Napoleon ordered an initial attack against the Austrian center on the Wagram Plateau, but the assault went forward piecemeal and was driven back behind Russbach Brook.

That night, encouraged by his successful defense of the plateau, Archduke Charles prepared to go on the offensive. Beginning with a pre-dawn attack against the French right in anticipation of Archduke John’s arrival from Pressburg, he ordered an advance along the entire front from Wagram to Leopoldau. If the various elements of the assault went forward in concert, he stood a good chance of success, and indeed things started well. At 4 a.m. the Austrian left wing struck as planned across Russbach Brook, catching Davout’s corps in the midst of a flanking march. For once, the Austrians had beaten the enemy to the punch, and as the guns roared to life in front of Markgrafneusiedl Napoleon himself rode to Davout’s support with several detachments of cavalry. At the same time on the opposite side of the field, the Austrians benefited from an early windfall when Marshal Bernadotte, fearful of an attack on his exposed flank, withdrew his corps from Aderklaa. The sudden evacuation enabled Bellegarde’s troops to occupy the town unopposed and forced Massena to shift his forces to the right to cover his exposed flank. This in turn opened the way for an Austrian end run in the vicinity of Leopoldau. Strategically vital, Aderklaa now served as a hinge upon which the Austrian advance proceeded en echelon, sweeping through Leopoldau, Breitenlee, and Aspern to threaten the French bridgehead.

By mid-morning, the attack on Davout’s front had been blunted and driven back as French cavalry supports succeeded in turning the enemy’s flank and pressing the Austrian left wing back across the plateau. At the same time, however, the French left had been bent back upon the center, with Aderklaa remaining hotly contested at the apex of the angle. Unless the French could check the Austrian advance on their left, both armies seemed destined to swing about like opposing doors on a turnstile. To prevent this, Napoleon pulled Masséna out of line and sent him south to halt the Austrian advance near Essling and protect the bridgehead. Eugene would shift left to take his place, part of his force covering Aderklaa while the rest, under MacDonald, prepared to advance in the direction of Sussenbrunn. To cover these various preparations, several cavalry attacks were ordered against Leopoldau.

Even by Napoleonic standards, it had been an extremely costly affair, with French casualties in the neighborhood of 34,000, and as many as 45,000 for the Austrians. A good many of these were attributable to unprecedented concentrations of artillery. The French alone mounted 488 guns for the battle, the Austrians only slightly fewer. Though Charles managed to withdraw in good order, a vigorous French pursuit soon ran his beaten troops to ground, forcing him to sue for peace. The summer would pass, however, before the Austrian emperor agreed to the humiliating terms of the Treaty of Schonbrunn (14 October).

With Austria’s capitulation, Napoleon was once again undisputed master of the continent, and yet his empire remained inherently vulnerable, a fact brought home to him with painful clarity when, two days before the treaty’s signing ceremony, a German student named Freidrich Staps was caught in an attempt to assassinate him. But for the fact that the Austrian emperor had sons to succeed him, Staps admitted, he would have killed Francis too. The implications of this statement were not lost on Napoleon, who understood only too well that had the would-be assassin been successful, his empire would have died with him. With no legitimate heir to take his place, all of his achievements remained only as secure as his own person, a situation that troubled him deeply. For some time he considered marrying a princess of one of the royal families of Europe by whom to legitimize his own dynasty; only his affection for Josephine had prevented him from taking such a step. Now the need to ensure the future of the empire became paramount, and prior to his return to Paris from Vienna, he sent orders for the opening between his and Josephine’s rooms at Fontainebleau to be walled up in token of the impending divorce. Weeks after his return he explained that while he still loved her, “in politics there is no heart.” In short order, an annulment was procured (the marriage, it turns out, had been invalid according to canon law), and Josephine retired to her chateau at Malmaison.

Meanwhile, in an effort to cement his relationship with Czar Alexander–who had proven unreliable, if not downright treacherous, during the recent war with Austria–Napoleon opened diplomatic efforts with the Russian court to find a suitable candidate for the new Empress of France. Though only sixteen, Alexander’s sister, Anna, was deemed suitable, and in November Napoleon sent an official proposal of marriage through his emissary, Caulaincourt. While Alexander agreed to the match, the decision rested with the Empress Mother, who, reflecting the Russian court’s fear and loathing of the French emperor, insisted that talk of marriage wait until the girl turned eighteen. For Napoleon, the idea of putting the security of his empire on hold for such a reason was a deal-breaker, and Alexander’s inability to overrule his mother came as an added disappointment; the Russian czar was clearly not the all-powerful ruler he had sought to befriend. Coming on the heels of Alexander’s suspect behavior during the recent fighting, the incident marked the beginning of a distinct rift between the two monarchs who on a raft at Tilsit had conspired to divide the world between them.

Turned down by the Russians, Napoleon next sought a bride within the Hapsburg clan, settling upon Francis I’s nineteen-year-old daughter, Marie Louise. In February 1810 another official proposal of marriage was delivered, to which Francis gave his consent, perhaps hoping to recover through marriage some part of what he had lost on the battlefield. In any case, his position was scarcely enviable; the upstart Emperor of France–a man reviled by monarchists throughout Europe, and who, over the past twelve years, had reduced the Austrian Empire by as much as a third–was now to become his son-in-law. In a final irony, a preliminary marriage ceremony was performed in Vienna in which Archduke Charles acted as Napoleon’s proxy.

For his part, Napoleon was delighted with the new alliance and could hardly wait to complete the arrangements. In fact, he did not wait for the official French ceremony before consummating the marriage. With typical impatience for the protocols of courtship, he took Marie to bed on the evening of her arrival, wasting no time in his effort to produce an heir. Three months later, following a whirlwind installation in the Tuileries, the new Empress was pregnant, and on 20 March 1811, she gave birth to a healthy son, to be known as the King of Rome. Despite Marie’s tendency toward girlish self-indulgence, Napoleon was well pleased with his pretty, blue-eyed wife, and at the age of forty he set out to prove himself a devoted husband, father, and son-in-law, lavishing attention on Marie and the child and actively soliciting the respect and affection of Francis, whose tactful reserve he chose to interpret as benign approval. Overnight, it seemed, he had managed to make an ally of one of his bitterest enemies, ensuring the future of his empire and bringing the promise of lasting peace to the war-weary people of Europe.

And yet the very suddenness of the new Franco-Austrian accord brought an added sense of uncertainty, if not unreality, to European politics. If alliances could be so readily made between apparent enemies, could not such alliances be as readily unmade? And what were the implications for existing relationships? The ability to change plans according to changing circumstances, so much a part of Napoleon’s brilliance on the battlefield, was hardly an asset in the deliberate world of diplomacy. For many observers, there was something at once monstrously presumptuous and hopelessly naive about Napoleon’s belief in his ability to shape public opinion to his own ends. Even so, Napoleon showed every sign of contentment with and devotion to his new life. “I am at the summit of my happiness,” he said at the time of his son’s birth. In hindsight, the remark would prove tragically prophetic.

QUEST FOR EMPIRE: The Napoleonic Wars Text V. HOLDING THE LINE 3) Decision on the Danube