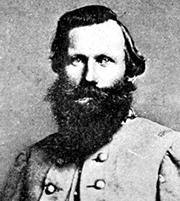 A native of southern Virginia, James Ewell Brown Stuart graduated from West Point in 1854 and took part in the capture of John Brown at Harpers Ferry in 1859. At the outbreak of the Civil War, he joined the Confederacy and began his war service in the Shenandoah Valley, where General Jackson placed him in command of his cavalry. Later chosen by Robert E. Lee to command all Rebel cavalry forces in the east, Stuart earned a reputation for daring based on an extensive raid behind enemy lines during the Peninsular Campaign. In the build-up to Gettysburg, however, his failure to maintain close contact with Lee was widely blamed for the Rebel defeat. He died of wounds suffered at Yellow Tavern, Virginia, in May 1864.