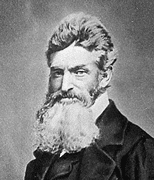 Born in Connecticut, John Brown grew up in Ohio and was destined to visit many parts of the country in the course of a restless life plagued by legal and financial troubles. Having embraced the growing abolitionist movement, he moved to Kansas in 1855, intent on keeping slavery out of the territory. A year later, following an attack on Lawrence by pro-slavery forces, he led a small band of followers in reprisal, murdering five unarmed settlers along Pottawatomie Creek. Over the next three years, he organized a plot to arm the slaves and launch an insurrection, and in October of 1859, he and 18 others seized the Federal arsenal at Harper’s Ferry. Captured shortly thereafter by federal troops under the command of Col. Robert E. Lee, Brown was hanged in nearby Charlestown.