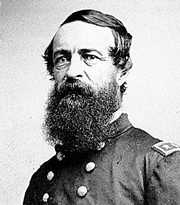 A first cousin to Union commander Fitz-John Porter, Pennsylvania-born David Dixon Porter served briefly in the Mexican navy, where he saw action against the Spanish. He enlisted in the American navy in 1829, and early in 1861 was sent to relieve Fort Pickens on the coast of Florida. The mission was canceled (and Porter’s loyalty questioned) when an officer he had chosen for the operation joined the Confederacy. Later placed in charge of the Mississippi Squadron, Porter proved instrumental in Grant’s campaign against Vicksburg. He was recognized for his service on three separate occasions by Congress, and after the war was promoted to Admiral upon the death of close family friend, David Farragut.