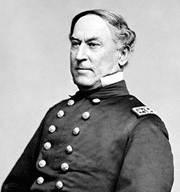 Born in Tennessee, David Glasgow Farragut was adopted by a family friend and naval officer, David Porter, following the early deaths of his mother and father. While sailing with Porter in the Pacific during the War of 1812, Farragut received his first command, a prize ship, at the age of twelve. At the outset of the Civil War, he quickly established his loyalty to the Union, and in March of 1862, after several days of ineffectual shelling of Forts Jackson and St. Philip, he ran his fleet past the forts to take New Orleans. Commissioned rear-admiral for his success, he made another daring gamble against shore batteries and torpedoes to capture Mobile in 1864.