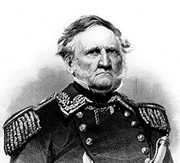 Winfield Scott first gained recognition in the War of 1812, and later won fame for the capture of Veracruz and Mexico City in the Mexican War. An important figure in the years leading up to the Civil War, he was nominated for President by the Whig Party in 1852. Though a native Virginian, he showed little sympathy for the party’s pro-slavery wing, and as a result lost the election to Franklin Pierce. Known as “Old Fuss and Feathers,” he served as commanding general of the army from 1841 to 1861. As an advisor to Lincoln, he called for the blockade and encirclement of the Confederacy in a policy known as “The Anaconda Plan.”