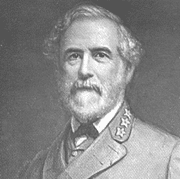 Virginia-born Robert Edward Lee graduated West Point in 1829 and served in the Mexican War. At the outbreak of the rebellion, he was offered command of Union forces but remained loyal to his native state. Assuming command of the Army of Northern Virginia in June of 1862, Lee quickly revealed a genius for offensive warfare, driving Union forces away from Richmond and, if only briefly, out of Virginia. At Chancellorsville, he divided his army into three parts and defeated a substantially larger foe with a steady succession of attacks. At Gettysburg, however, his instinct for the offensive led to a doomed assault on the Union center, and the tide of war turned. Eventually surrounded and hopelessly outnumbered, he surrendered the Army of Northern Virginia at Appomattox on 9 April 1865.