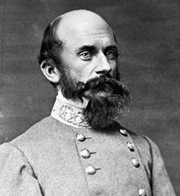 Richard Stoddert Ewell was born at Georgetown, Washington, D.C., and graduated West Point in 1840. He served in the Mexican War and later fought against the Apache in the New Mexico Territory. Ewell commanded a brigade at First Bull Run and a division in Jackson’s Shenandoah Valley Campaign. After losing a leg at Second Bull Run, he returned to serve as a corps commander in the Gettysburg Campaign and would be widely criticized for his failure to capture Cemetery Hill during the first day of the battle. The following spring, at Spotsylvania, he lost Lee’s confidence and was reassigned to command of the Richmond garrison. Following the war, he retired to a farm in Tennessee.