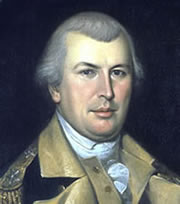 A native of Rhode Island, Nathanael Greene began his Revolutionary War service as a private in his state’s militia during the Siege of Boston. Quickly rising through the ranks, he was made a brigadier in the Continental Army upon the arrival of General Washington, who placed him in charge of the city following the British evacuation. Earning the trust and friendship of his commander during the early years of the war, Greene eventually took on the difficult task of Quartermaster-General during the army’s harrowing winter at Valley Forge. Having established a reputation for good judgment and devotion to the cause, he was named to replace General Gates as commander in the South, where he proved his worth at Guilford Court House and Eutaw Springs, helping force Cornwallis into a corner at Yorktown.

Help support Age of Revolution content with a small donation of $2.95.
Nathanael Greene