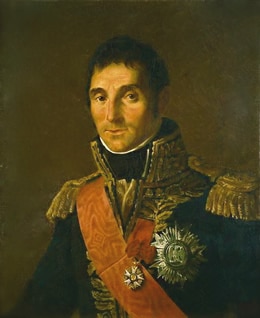 Orphaned as a child, André Masséna made the military his home from an early age. Soon after the revolution, however, he applied for a discharge, got married, and became a smuggler in the mountainous region of Savoy. Returning to the army in 1792, he rose to divisional command in the Army of Italy, and upon Bonaparte’s arrival in 1796, was placed in charge of the army’s vanguard, where he earned a reputation as an aggressive mountain fighter in the Italian Campaign. After his service in the 1809 Campaign, he was sent to Spain, where he defeated Wellington at Busaco, but was later stymied by the enemy’s formidable Line of Torres Vedras. Though he rallied to Napoleon during the Hundred Days, he was not given a field command.