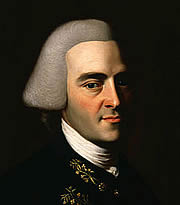 John Hancock was born in Braintree, Massachusetts, and, following the death of his father in 1744, moved to Boston to live with his uncle, whose successful import-export business he would inherit in 1763. Then the richest man in the colonies, with political ambitions that benefitted from his friendship with John Adams, Hancock would become a leader in the growing independence movement. While his opposition to the Stamp Act (1765) was tentative, when the Townend Acts (1767) imposed new and stronger customs duties, Hancock challenged the authorities in an early act of resistance that would help ignite the Revolution. A generous and widely popular figure, he served as President of both the first and second Continental Congress, and become the first and most conspicuous signer of the Declaration of Independence.