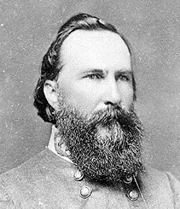 A native of South Carolina, James Longstreet graduated West Point in 1842 and served in the Mexican War. He saw long service in the Civil War, leading a brigade at First Bull Run and eventually rising to corps command. A strong proponent of defensive tactics, he opposed Lee’s battle plan at Gettysburg, and the reluctance with which he carried it out would be blamed for the defeat. Requesting a transfer to the west shortly thereafter, he proved instrumental in the Rebel victory at Chickamauga and returned east to play a key role at The Wilderness, where he was gravely wounded. He recovered sufficiently to take part in the war’s final action, and after the war would go on to serve in the administration of an old friend, Ulysses S. Grant.