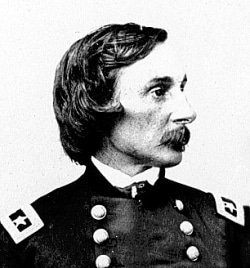 Born at Cold Springs, New York, Gouverneur Kemble Warren graduated from West Point second in his class and served as a surveyor and mapper of the territories before returning to the Point to teach mathematics. He saw long service in the Civil War, taking part in virtually every major campaign in the eastern theater. At Gettysburg, he rushed troops to Little Round Top, saving the Union left. Late in the war he was unjustly relieved of command following the Battle of Five Forks, a demotion he strenuously contested. He would be officially exonerated after his death.