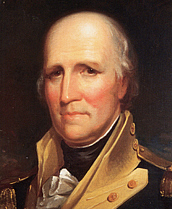 Born in Virginia, George Rogers Clark was one of six brothers, the youngest of whom, William, would become co-leader of the Lewis and Clark expedition of 1803-1806. Serving as a likely model for his sibling’s exploits, George would achieve fame early as the Conqueror of the Old North-West. Having spent several years surveying parts of what is now West Virginia, he made his first trip to Kentucky in 1772 and would lead a movement to annex the territory to Virginia. During the Revolution, he was authorized to raise troops, cross north of the Ohio and capture key British strongholds throughout the region, which he did. Though an attempt to seize Detroit would ultimately fail, Clark’s actions would be widely credited with securing the territory for the new United States.