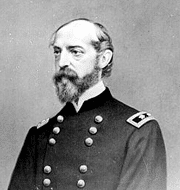 George Gordon Meade graduated West Point in 1835 and worked as a civil engineer for several years before returning to the army in 1842. He proved an aggressive leader in the early battles of the Civil War and quickly gained promotion to brigadier. Wounded during the Peninsular Campaign, he rose to divisional command upon his return to service and was chosen to lead the Army of the Potomac in the aftermath of Chancellorsville. Though credited with the pivotal victory at Gettysburg, Meade would be widely criticized for failing to aggressively pursue the enemy following his success. He continued as nominal commander of the army, working closely with General Grant during the Overland Campaign and through to the end of the war.