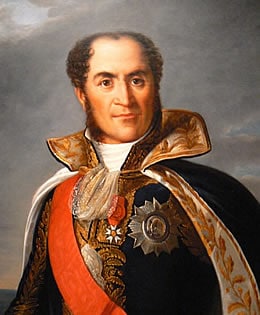 Guillaume Marie-Anne Brune was a law student in Paris at the time of the revolution and associated with various members in the National Assembly. By 1793 he had joined the army and risen to the rank of brigadier. He took part in putting down the insurrection of 13 Vendemiaire and later served under Bonaparte in the Army of Italy. Placed in charge of the army’s reserve at Boulogne in 1805, he occupied Swedish Pomerania but fell from favor with Napoleon on the basis of unproven suspicions of disloyalty, following which he would play a minor role in the campaigns of the Empire. Restored to Napoleon’s good graces again during the Hundred Days, he was tasked with defending southern France, where he was killed by a Royalist mob in the aftermath of Waterloo.