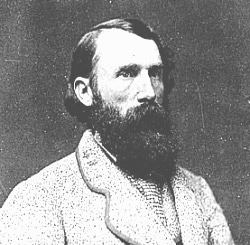 A native of Virginia, Ambrose Powell Hill graduated from West Point in 1847 and served in the Mexican War. Despite chronic illness that frequently found him rising from a sickbed to give battle, he would prove a mainstay of the Confederate war effort. At both Antietam and Second Bull Run, the last-minute arrival of Hill’s division saved the Rebel army from imminent disaster. Rising to corps command in the aftermath of the Battle of Chancellorsville, Hill became one of Lee’s most trusted lieutenants. He was killed in the fighting at Petersburg on 2 April 2 1865, a few days before the war’s end. His name is said to have been among the last words spoken by both “Stonewall” Jackson and Robert E. Lee.