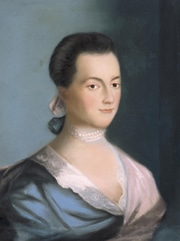 The daughter of a Congregationalist minister, Abigail Adams was related on her mother’s side to Boston’s influential Quincy family. Though she grew up with health issues that kept her from attending school, she learned to read and write at an early age and at 19 married her third cousin, John Adams, who had begun a law practice in Braintree. The couple later moved to Boston, where they were caught up in the growing turmoil of the Revolution. During her husband’s frequent absences on legal and state business, Abigail wrote daily, her letters providing a revealing chronicle of the day-to-day life of the period. Later, when he was elected president of the United States, she would serve as an outspoken and highly influential First Lady.