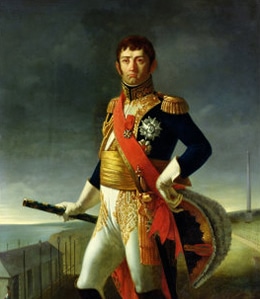 The son of a lawyer, Jean Jean-de-Dieu Soult joined the Royal Army at age 14, and by 1799 had assumed divisional command under André Masséna. Five years later, as a corps commander, he was responsible for seizing the Pratzen Heights at Austerlitz, resulting in the rout of the Allied army. At Jena his corps turned the Prussian left, driving the enemy back upon Weimar. Later accompanying Napoleon to Spain, he was largely responsible for the death of the English commander, Sir John Moore. During the Hundred Days, he took Berthier’s place as chief of staff, and following the defeat at Waterloo, went into retirement. He would later return to service as War Minister under Louis Philippe.