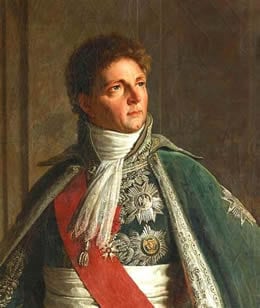 The son of an engineer in the Royal Army, Louis-Alexandre Berthier began his military career at a very young age, serving with French forces in the American Revolution. Soon after the fall of the Bastille, he was named major-general of the Versailles National Guard, but his loyalty to the Bourbons led to his discharge in 1792. Upon meeting Bonaparte in 1796, he was appointed Chief of Staff of the Army of Italy and quickly proved his worth. In addition to his bravery in battle, his ability to read maps and convey complicated maneuvers in simple language made him invaluable to his new commander. Though long a trusted friend of the Emperor, Berthier rallied to Louis XVIII following Napoleon’s abdication and remained loyal to the king upon Napoleon’s return to power. Retiring to his estate in Bamberg, Berthier fell to his death shortly before Waterloo, an apparent suicide.