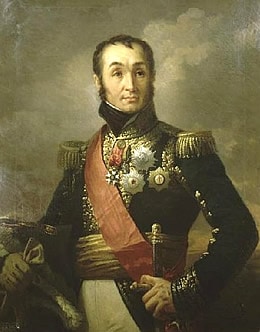 Enlisting in the French army at 17, Nicolas Charles Oudinot was later recalled home by his father, who hoped to set him up in the brewing business. During the Revolution, he returned to uniform and was quickly promoted to lieutenant-colonel in a regiment of volunteers. Rising to brigadier general, he served as chief of staff under Massena during the Marengo Campaign and went on to serve at Austerlitz and again at Friedland, where he led a division under Marshal Lannes in the opening phase of the battle. At Wagram, he commanded a corps and was instrumental in breaking through the Austrian left, for which he received his marshal’s baton. During the arduous retreat from Moscow, he oversaw a crossing of the ice-choked Beresina River and fended off a large Russian force under General Tshitshagov. Following the campaigns of 1813-14, Oudinot rallied to Louis XVIII and did not return to Napoleon during the Hundred Days.