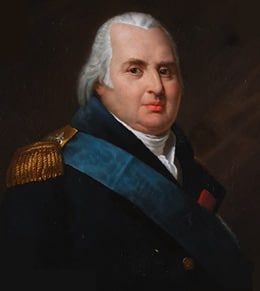 Louis Stanislas Xavier was born at Versailles, and the early deaths of his father and eldest brother would make him heir apparent during the reign of his remaining brother, Louis Auguste. Upon the latter’s capture and eventual execution, Louis Stanislas proclaimed himself regent and solicited the support of monarchists throughout Europe. Following Napoleon’s abdication in 1814, the corpulent, gout-ridden Louis (waggishly known as “the Unavoidable”) would become king, but his general unpopularity would set the stage for the Hundred Days. Upon Napoleon’s final defeat and exile, Louis returned once again, ruling until his death in 1824.