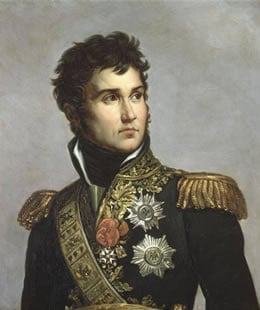 The son of a stable hand, Jean Lannes was a dry cleaner’s apprentice before enlisting in a battalion of volunteers in 1792. In 1795 he was dismissed for political reasons, but rejoined as a private and quickly earned a reputation for conspicuous bravery. During the Italian Campaign, his exploits at Lodi and Arcola would become the basis for a close friendship with Napoleon. During the Marengo Campaign, now a major-general, he led the French vanguard across the Alps, scoring a hard-won victory at Montebello for which he received a dukedom. At Marengo, he commanded the French right and was responsible for delaying the Austrian advance long enough to allow the army to regroup. During the 1809 Campaign, in the fighting at Aspern-Essling, he was struck in the legs by a cannonball and died of his wounds six days later.