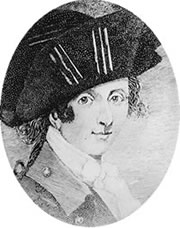 The son of a British knight, Barry St. Leger was born in Ireland and educated at Eton and Cambridge. He joined the British Army at the age of 23 and served in the Seven Years’ War at the sieges of Louisbourg and Quebec. In 1776 he came to the relief of Sir Guy Carleton during the American invasion of Canada, and later played a key role in British plans to seize Albany and isolate New England. Commanding a combined force of some 2,000 Regulars, Tories and Iroquois Indians, he was to move up the St. Lawrence, across Lake Ontario to Fort Oswego, and then down the Mohawk, coming up on Burgoyne’s flank during the advance on Albany. In the process, however, St. Leger was obliged to besiege Fort Stanwix and eventually retreated under threat of attack from an American relief force under Benedict Arnold. The results would contribute to Burgoyne’s defeat and surrender at Saratoga.