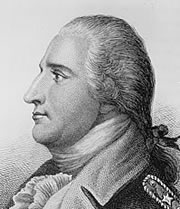 Benedict Arnold was born in Norwich, Connecticut, to a well-to-do family whose fortunes declined following the death of two of his siblings. He found early success as a partner in a shipping enterprise, but British trade restrictions soon threatened his livelihood, making him an ardent supporter of independence. Upon the outbreak of the Revolution, he was given a commission and sent to capture Fort Ticonderoga, which he accomplished with the unwelcome aid of Ethan Allen. The following year, however, he was defeated and captured during an ill-fated campaign to capture Quebec. Despite evidence of initiative and extreme personal bravery, he proved a prickly character and was widely accused of being more interested in money than in the Patriot cause, a charge that was born out when he spied for and then joined the British side. After the war, he struggled to gain acceptance in London and eventually moved to Ontario.

Help support Age of Revolution content with a small donation of $2.95.
Benedict Arnold