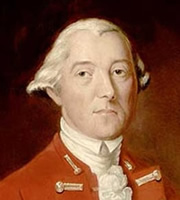 Guy Carleton was born in Ireland to a Protestant family and from an early age pursued a career in the British army. In the Seven Year’s War, he served as quarter-master general to General Wolfe and played an important role in the fall of Quebec. Later appointed governor of the province, he proved an able administrator despite the lack of any experience in politics, and successfully defended the city against the American attack of 1775. With the arrival of reinforcements the following spring, he went on the offensive, driving off a relief force and destroying an American fleet at Valcour Island on Lake Champlain. The next year, however, he resigned as governor when General Burgoyne arrived to begin his ill-fated campaign to seize Albany. He would return to assume command of all British forces in Canada following the British capitulation at Yorktown.

Help support Age of Revolution content with a small donation of $2.95.
Guy Carleton