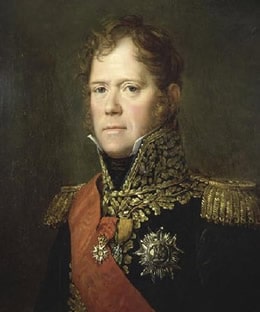 The son of a barrel maker, Michel Ney joined a hussar regiment in 1787 and earned a reputation for fearlessness in the fighting on the frontier. In 1805, his aggressive attack at Elchingen helped bottle up the Austrian army at Ulm and led to a dukedom. Conspicuous as well at Jena, Eylau, and Friedland, he became famous as a paragon of endurance and hard fighting. A key figure in the Russian Campaign, he commanded the rear-guard during much of the calamitous retreat from Moscow. After the fall of Paris in March 1814, he swore allegiance to Louis XVIII, but when Napoleon escaped from Elba, Ney switched sides again, and his decision to order a massive cavalry attack at Waterloo would play a decisive role in the battle. Captured in the aftermath of the French defeat, he was sentenced to death and executed by firing squad on an obscure Paris side street.