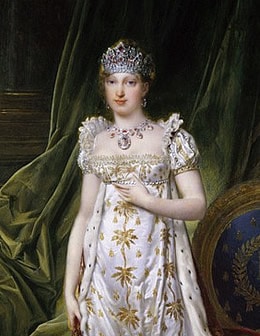 Born in Vienna, Marie Louise was the eldest daughter of Emperor Francis II and a niece of Marie-Antoinette, the former queen of France. As Empress, she would in many ways represent a repudiation of the French Republic and all that it had stood for. Despite this historical irony, her marriage to Napoleon initially proved a happy one, providing him with a long-awaited male heir, who would bear the title King of Rome. In the aftermath of Napoleon’s abdication at Fontainebleau, Marie returned within the orbit of the Hapsburg court. Following his death in 1821, she would remarry twice and eventually outlive her son by fifteen years.