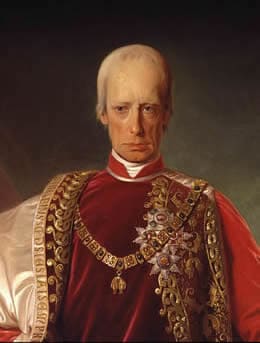 Heir to the Hapsburg Empire, Francis inherited the title Holy Roman Emperor in 1792, at the outbreak of the French Revolutionary Wars. For much of the next 25 years he would see his dominions shrink and his dignity diminished, at the hands of Napoleon, who, following the Battle of Wagram (1809), pursued negotiations for Francis’ daughter’s hand in marriage under circumstances that did not allow for a graceful refusal. Following the defeat of the Grand Army in the disastrous Russian Campaign, Francis would help orchestrate the Allied counter-march that ended with Napoleon’s abdication at Fontainebleau.