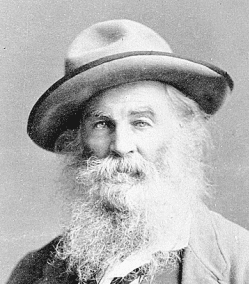 Born and raised in Brooklyn, N.Y., Walt Whitman worked in a print shop from a young age and went on to become a journalist and poet. Eventually moving to Washington, D. C., he worked in various government offices and witnessed the return of the defeated Federal troops following the Battle of First Bull Run. In 1862 he traveled to the front to nurse his brother, George, who had been wounded at the Battle of Fredericksburg, and soon began visiting war hospitals on a regular basis, bringing gifts and spiritual comfort to the wounded. A keen observer of American life, he was a prolific chronicler of the war years in particular, publishing a collection of poems on the war, Drum Taps, in 1865.