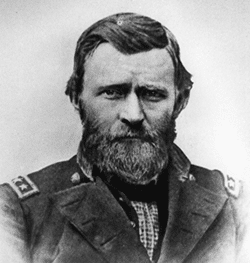 Born near Cincinnati, Ulysses Simpson Grant graduated West Point in 1843 and served in the Mexican War. Upon the outbreak of the rebellion, he quickly rose to command of the Army of  theTennessee and won early recognition with the capture of Forts Henry and Donelson. Following a hard-won victory at Shiloh, he undertook an unorthodox campaign against Vicksburg and went on to rescue Chattanooga from a Rebel siege. Eventually placed in overall command of Union forces, he oversaw Meade’s operations against Lee in 1864, and in April of the following year received the latter’s surrender at Appomattox. Following the war, he became the 18th president of the U. S., serving from 1869 to 1877.