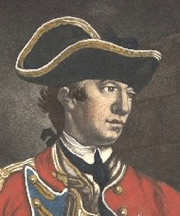 William Howe was born to the English aristocracy and entered military service at a young age. He would play a key role in the British conquest of French Canada and assumed a measure of political power upon election to Parliament 1758. Though he publicly espoused a lenient policy toward the American colonies, he angled for and eventually won command of British forces in America. Taking control in the aftermath of the Battle of Bunker Hill, he abandoned Boston and seized New York in a well-conceived and well-executed amphibious campaign. The following year, 1777, he mounted another successful campaign in Pennsylvania, capturing Philadelphia, yet his failure to crush the Continental Army, compounded by a failure to adequately support Burgoyne’s advance upon Albany, would eventually lead to his resignation.

Help support Age of Revolution content with a small donation of $2.95.
William Howe