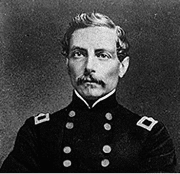 Pierre Gustave Toutant Beauregard graduated West Point in 1838 and served as an engineer in the Mexican War, later returning to his native New Orleans to oversee engineering projects throughout the Gulf states. Placed in command of Rebel forces in and around Charleston at the outbreak of the Civil War, he gave the order to fire on Fort Sumter on April 12, 1861, and went on to lead Confederate forces in the Battle of First Bull Run. In March of the following year, in response to a Union advance in Tennessee, he joined A. S. Johnston at Corinth, Mississippi, and served as second-in-command at the Battle of Shiloh (April 6), assuming field command upon Johnston’s death. Shortly thereafter, Beauregard left the army for reasons of ill health but later returned to oversee coastal defenses at Charleston. In 1864 he would play a role in the defense of Richmond and Petersburg.