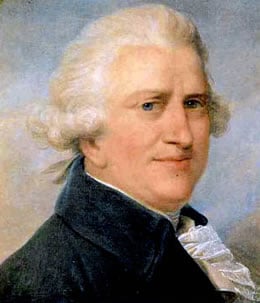 The son of a doctor, Pasquale Paoli was born in the mountains of northern Corsica and from an early age was intimately involved in the liberation of his island homeland. Following an early defeat, he accompanied his father into exile in Naples, but by 1755 had returned to proclaim the island’s independence and lead a successful resistance movement, driving the Genoese out of all but a few coastal strongholds. After helping draft a constitution, he was elected president and commander-in-chief of the new Republic of Corsica, presenting a model of democratic leadership that would serve as inspiration for the Founding Fathers of the United States, among others. The Genoese responded by selling their rights to the island to the French, who invaded the island in force in 1768. After a period of exile in England, Paoli returned to the island under an amnesty arrangement and was elected President of the Department of Corsica. During this period he came into contact with Napoleon, of whose motives he remained deeply suspicious. In the end, he would force the young Jacobin to pursue a career elsewhere, the results of which would not be inconsequential.

Help support Age of Revolution content with a small donation of $2.95.
Pasquale Paoli