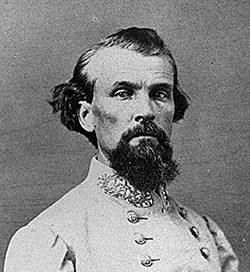 A gambler, plantation owner, and slave trader in his native Tennessee, Nathan Bedford Forrest enlisted as a private in the Confederate army at the outbreak of the Civil War but eventually raised, equipped, and led his own cavalry brigade. Though lacking formal military training, he earned a reputation as a ruthless fighter and unconscionable racist. Widely suspected of ordering the massacre of some 300 black troops at Fort Pillow in 1864, Forrest was closely associated with the Ku Klux Klan following the war.