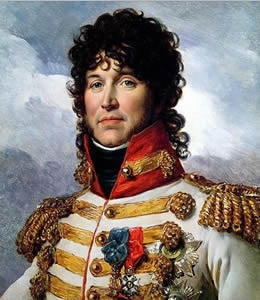 The son of an innkeeper, Joachim Murat joined a cavalry regiment at 19 and by 1795 had risen to the rank of captain. A key figure in the events of 13  Vendemiaire, he later joined Bonaparte in Italy, serving as aide-de-camp and quickly establishing a reputation for bravery. He took part in the Egyptian Campaign and played a key role in the coup of 19 Brumaire, leading a body of grenadiers into the meeting of the Five Hundred and giving the order to oust the peoples’ deputies. He would be repaid with many honors, including the hand in marriage of Napoleon’s sister, Caroline. In 1808 his accession to the throne of Naples strained his relations with Napoleon, but he answered the Emperor’s call during the Russian Campaign and commanded the army’s vanguard upon its entry into Moscow. Following Napoleon’s return from exile, Murat marched on Bologna in support, but the action proved premature. Arrested and sentenced to death, in a final act of bravado he gave the orders to his own firing squad.