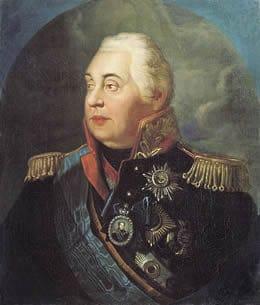 Destined to command the Russian Army during the Patriotic War of 1812, Mikhail Illarionovich Kutusov was born in St. Petersburg and trained for the military from an early age. During the French invasion of 1812, Kutusov was placed in charge of the army shortly before the massive battle at Borodino, where his defeat would lead to the destruction of Russia’s traditional capital. Having drawn the enemy deep into Russian territory, however, Kutusov would go on to orchestrate the virtual annihilation of the Grand Army during its long return march. Though vindicated in the end, he would fall ill and die a few months later.