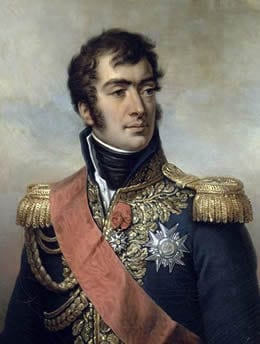 Descended of minor nobility, Auguste Frédéric Louis Viesse de Marmont attended L’Ecole Militaire, where he became an early friend and confidant of Napoleon. He took part in the coup d’etat of 19 Brumaire and served ably in the Marengo and Austerlitz campaigns. In 1809 he joined forces with Prince Eugene’s Army of Italy during the Battle of Wagram. Later, as commander of the Army of Portugal, he scored an initial victory against Wellington at Cuidad Roderigo, but was outmaneuvered and badly beaten at Salamanca. In the campaigns of 1813-14, he helped defend Paris against the advancing Allies but surrendered his corps on the mistaken assumption that Napoleon had already abdicated. For this, his name would become synonymous with betrayal.